Seventh seed Thiem is the first Austrian to make a final at the majors since Thomas Muster was champion in Paris in 1995. 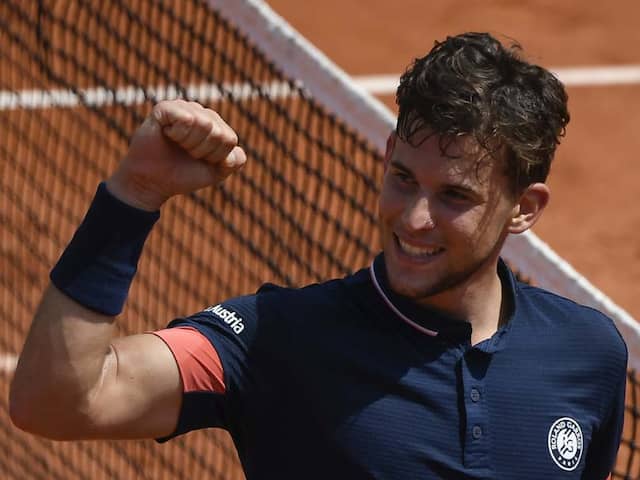 Dominic Thiem ended Marco Cecchinato's French Open fairytale on Friday, reaching his first Grand Slam final with a 7-5, 7-6 (12/10), 6-1 victory. Seventh seed Thiem is the first Austrian to make a final at the majors since Thomas Muster was champion in Paris in 1995. Thiem will face either 10-time champion, and world number one, Rafael Nadal or Juan Martin del Potro, the fifth-seeded Argentine, in Sunday's final. World 72 Cecchinato had knocked out three seeded players to reach the semi-finals, including 12-time major winner Novak Djokovic in the quarter-finals. Thiem, 24, has a losing record against both Nadal (3-6) and Del Potro (0-4) but he is the only man to have defeated the Spaniard on clay in the last two years.

He believes he has a particularly powerful weapon on his side -- breakfast.

"I need to regenerate and have a good breakfast to keep up my good level.

Thiem, who was playing in his third successive French Open semi-final, admitted the second set had been a nervy encounter after needing five set points to get through it.

"The big key was the second set," he said.

"It was a really close tiebreak and I didn't want that especially after I missed an easy volley at 6/4.

"That was not a nice feeling."

Cecchinato had never won a Grand Slam match before this year's Roland Garros but made the semis with a string of stunning wins.

He put out seeded players Pablo Carreno Busta and David Goffin before the seismic shock of knocking out 2016 champion Djokovic in the quarter-finals.

Thiem, who swept past second seed Alexander Zverev in the last-eight, broke the Italian in the first game.

By the sixth game of the opener, Cecchinato had claimed just one point off the Austrian's serve.

However, he reclaimed the break in the eighth game before edging ahead to 5-4.

Thiem was quick to respond, reeling off the next three games to take the set in 46 minutes.

Just as he had against Djokovic, Cecchinato was then locked in another marathon tiebreak.

This time, however, he lost it 12/10 despite having three set points.

That 61-minute set sucked the life out of the crowd favourite and Thiem pounced, quickly moving to a double break at 5-0 in the third set.

Cecchinato, whose career was almost derailed two years ago by a match-fixing scandal before his name was cleared, stopped the rot in the sixth game.

But Thiem went for the kill in the seventh game, leaving an emotional Cecchinato to take the applause of the crowd.

Later Friday, Nadal looks to take another step closer to an 11th French Open title and 17th at the majors.

The world number one faces Del Potro who has made the last-four for the first time in nine years.

"I came here without big expectations," said 2009 US Open champion Del Potro who has flirted with retirement on numerous occasions after a career-long battle with wrist injuries.

Nadal has never failed to win the title when reaching the last four at Roland Garros, but knows that Del Potro, who he has lost to five times in 14 meetings, is a dangerous opponent.

"Del Potro has achieved great victories this year," said Nadal who dropped his first set at Roland Garros in three years in his quarter-final victory over Diego Schwartzman.

Comments
Topics mentioned in this article
Dominic Thiem Marco Cecchinato Football
Get the latest Cricket news, check out the India cricket schedule, Cricket live score . Like us on Facebook or follow us on Twitter for more sports updates. You can also download the NDTV Cricket app for Android or iOS.