Mardy Fish ousted an ailing David Ferrer to reach the semi-finals of the $9 million WTA and ATP Masters Series tournament on Wednesday, and insured he'll become the top-ranked American on the ATP Tour. 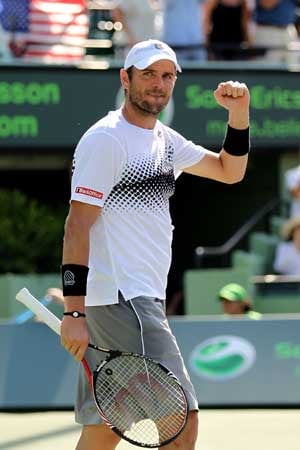 Mardy Fish ousted an ailing David Ferrer to reach the semi-finals of the $9 million WTA and ATP Masters Series tournament on Wednesday, and insured he'll become the top-ranked American on the ATP Tour.

While Ferrer had plenty of praise for Fish's strong performance on serve, he said he couldn't really rise to the challenge because of a stomach ailment.

"I think it's the digestion," Ferrer said. "I went to the court, and I when I run to rallies, a lot of pain in my stomach. In the second set, I cannot run anymore."

Fish said he wasn't aware of Ferrer's illness, although he did notice the Spaniard's form fell in the second set.

"Obviously he missed a lot more, especially in the second set, than he normally does," Fish said.

Fish thought the windy conditions had something to do with it, and perhaps with the back-to-back double faults that Ferrer served up to drop the 11th game of the first set.

The victory insures Fish will climb to at least 11th when the rankings are next released, while Andy Roddick will fall from eighth to 14th after losing his tournament-opener last week.

"It's very humbling," Fish said. "This is a pretty big country, a lot of people playing tennis. So I'll try to put it into perspective, and I will.

"No. 11, career high No. 11 sounds really good, too. You know, these are the rewards that come with working as hard as I did."

Comparing himself specifically with Roddick, Fish said it would be hard to feel he had surpassed his friend and rival.

More importantly for the 29-year-old Fish, he has reached the semi-finals at Key Biscayne for the first time.

He next faces either second-seeded Novak Djokovic or unseeded South African Kevin Anderson.

Serbia's Djokovic is unbeaten in 2011, with 21 match victories and titles at the Australian Open, Dubai and Indian Wells.

Anderson became South Africa's first ATP titlist in more than five years when he won the title in Johannesburg in February.

The evening's match offers Djokovic a chance for revenge. In the only prior meeting between the two, Anderson defeated Djokovic in three sets in the second round here three years ago.

At the time, Djokovic was ranked third in the world and Anderson was ranked 122nd.

Russia's Zvonareva, a finalist at Wimbledon and the US Open last year, overcame a set point with an ace in the first set and won four straight games to take control of the second set.

"I'm pleased the way I played today, and especially against Agnieszka it's never easy," Zvonareva said. "She keeps the ball in play, so you really have to focus really well.

"Especially in those windy conditions, you know, I had to take my chances and come into the net. I was pretty successful out there, so I'm pleased with that as well."

She improved to 4-0 in quarter-finals this year and awaits the winner of Wednesday night's match between defending champion Kim Clijsters of Belgium and 2009 champion Victoria Azarenka.

"I know both players pretty well. No matter what, it's going to be a difficult match, tough challenge ... I enjoy those tough matches."

Thursday's other women's semi-final has already been set with Germany's Andrea Petkovic due to take on Russian Maria Sharapova.

Comments
Topics mentioned in this article
Tennis Milos Raonic Mardy Fish Novak Djokovic David Ferrer Somdev Devvarman Rafael Nadal Melanie Oudin
Get the latest updates on ICC T20 Worldcup 2022 and CWG 2022 check out the Schedule, Live Score and Medals Tally. Like us on Facebook or follow us on Twitter for more sports updates. You can also download the NDTV Cricket app for Android or iOS.