Federer is Not Necessarily a Shadow of Himself

Roger Federer may have exited Australian Open in the third round but he has won too often in recent months, and even recent weeks, for any reasonable tennis observer to take his Melbourne performance as a confirmation that the end should be nigh. 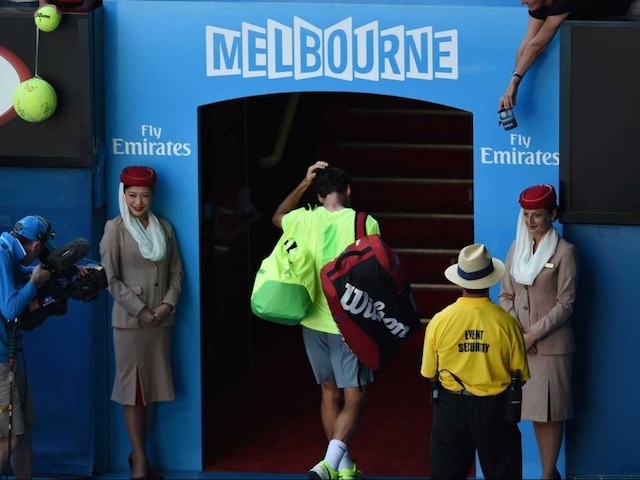 Roger Federer makes his way back after losing to Andreas Seppi in the 3rd round of Australian Open.© AFP

In darker moments for Roger Federer, a loss like Friday's, to Andreas Seppi, could have restarted the doomsday chatter that Federer likes just about as much as a certain Spanish left-hander's forehand.

But Federer, 33, has won too often in recent months, and even recent weeks, for any reasonable tennis observer to take a surprise third-round defeat at the Australian Open as confirmation that the end should be nigh. (Also read: Roger Federer far from done in Grand Slams, say rivals)

Yes, his 6-4, 7-6 (5), 4-6, 7-6 (5) loss was his earliest defeat in Melbourne since 2001. Yes, it came against Seppi, an Italian he had beaten in all 10 of their previous matches. And, yes, it seemed altogether appropriate that he showed up at his postmatch news conference wearing a T-shirt bearing the letters "TNNS," since there were a few things missing from his game against Seppi, too.

Baseline precision, above all forehand consistency, was lacking. A certain sense of occasion, too.

As it turned out, Federer had his better stuff in Brisbane, where he won a tour event two weeks ago, instead of in Melbourne. And when he needed brilliance Friday - with a 3-1 lead in the second-set tiebreaker, or on what turned out to be the final exchange - it was Seppi who improvised better on the run.

Seppi's final shot - a forehand stab winner that floated down the line with Federer in prime position at the net - certainly looked to be the shot of his career so far.

"At the beginning, I thought I couldn't even reach the ball," Seppi said.

But now, he is the one advancing to the fourth round, where he will face 19-year-old Australian Nick Kyrgios.

"Andreas played maybe the best match of his life, especially from a mental point of view," said Riccardo Piatti, the veteran Italian coach now working with Milos Raonic. "Roger, I think, is paying for a very long season last year with Davis Cup, and also the exhibitions in Asia and Brisbane. From a coach's point of view, maybe he just needed a bit more training and rest."

It is a fine theory. Federer did have a long, reaffirming season in 2014, and after aggravating his long-running back problem in his penultimate tournament, the ATP Finals in London, he had to fight to help win the Davis Cup for Switzerland against France a week later.

He made it clear earlier in the week in Melbourne just how labor intensive that accelerated recovery process had been in order to get him from being barely able to get out of bed in London on Sunday to the practice court in Lille, France, three days later.

"Clearly, I was taking medication, heavy ones," he said. "Just got back in time."

Federer also revealed that he had hurt his back again during the decisive victory over Richard Gasquet of France in the final.

He later played for two days in India in December as part of the inaugural season of the International Premier Tennis League, an Asian-based team tennis venture.

Novak Djokovic, the world No. 1 and most consistently successful hard-court player, remains the Australian Open's rightful favorite. Although Federer, the No. 2 seed, is out, the bottom half of the draw has hardly been emptied of major players or major champions.

That certain Spanish left-hander, Rafael Nadal, remains, as does Andy Murray. Murray will play Grigor Dimitrov in the fourth round. Nadal will face the towering and improving Kevin Anderson. There is also Tomas Berdych, who will play Bernard Tomic, one of the two young Australians remaining, along with the explosive Kyrgios.

Nadal was on the verge of elimination Wednesday in the second round as he battled stomach pain, dizziness and cramps before prevailing in five sets against Tim Smyczek, a U.S. qualifier. But Nadal was back doing leaps at the net for the coin toss against Dudi Sela on Friday and went on to win, 6-1, 6-0, 7-5.

He was not always thoroughly convincing, but there were the usual forehand winners in abundance and a perfect seven break points saved out of seven faced. In an on-court interview afterward, former Australian Open champion Jim Courier pressed Nadal to give a percentage on how he felt physically.

Nadal rubbed his hand through his hair.

"I was never very good at mathematics," he said, grinning and taking his leave.

But unlike Federer, his longtime rival, he was not soon to be heading for the airport.