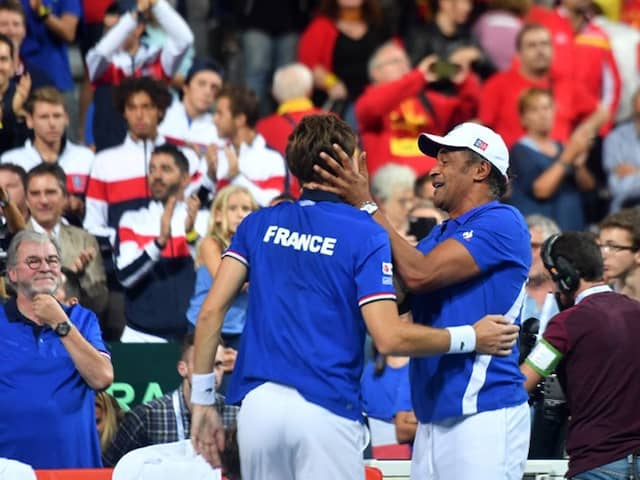 France captain Yannick Noah said he "deserved a beer" to celebrate his defending Davis Cup champions' seamless progress past Spain and into their second successive final on Saturday. Who France will face in November will be determined on Sunday, with the United States winning their doubles against Croatia to trail 1-2 ahead of the closing two rubbers in the other semifinal in Zadar. Veteran duo Julien Benneteau and Nicolas Mahut secured France's decisive win, beating Feliciano Lopez and Marcel Granollers 6-0, 6-4, 7-6 (9/7).

"This is the best tennis I've seen from my team in three years," beamed 1983 French Open winner Noah.

Noah was full of praise for his victorious doubles duo.

"The way my guys played today - they were so good," said Noah.

"Benneteau was probably the best player on the court and his attitude was unbelievable."

Benneteau had come out of retirement to serve his country on the hardcourt in Lille.

"It's quite possible it could be the last match of my career on tour," Benneteau said.

"And what a way to finish!"

But there seems every chance he will figure in next month's climax to a competition that from next year becomes the Tennis World Cup.

Some fans in Lille wore black t-shirts as a form of 'mourning' at the passing of the Davis Cup in its present format.

A large banner was unfurled reading "Change it Back".

France were left in command of the tie after wins in both of Friday's opening singles.

Croatia's top player and world number six Marin Cilic then defeated Frances Tiafoe, a Davis Cup debutant, 6-1, 6-3, 7-6 (7/5) to leave the hosts on the brink of the final.

"Cilic is a big favourite... it will definitely not be easy to defeat him in front of a home crowd," Krajan told television channel HRT.

If Johnson causes an upset against Cilic, Coric will play against Tiafoe in a deciding rubber.

Comments
Topics mentioned in this article
Julien Benneteau Nicolas Mahut Feliciano Lopez Marcel Granollers Tennis
Get the latest Cricket news, check out the India cricket schedule, Cricket live score . Like us on Facebook or follow us on Twitter for more sports updates. You can also download the NDTV Cricket app for Android or iOS.