Novak Djokovic is vying to break through for a first Cincinnati Masters win after coming up empty in five finals. 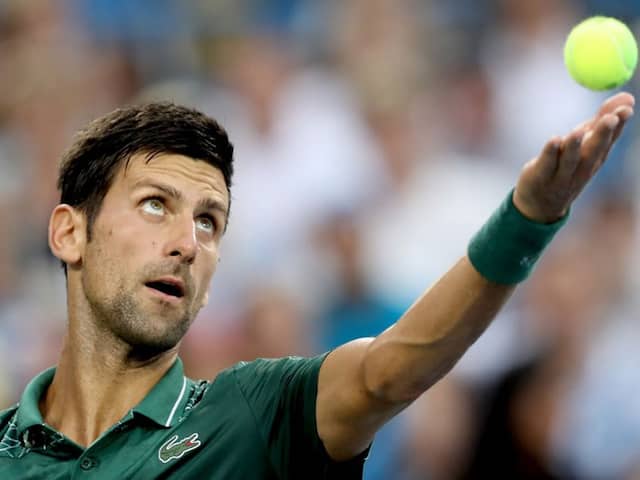 Novak Djokovic's third-round struggle with defending champion Grigor Dimitrov was halted by rain, forcing the pair to come back on Friday at the ATP-WTA Cincinnati Masters. Officials called a halt to a frustrating day on which Roger Federer was never able to take the court for his third-round match against Leonardo Mayer. Wimbledon champion Djokovic is vying to break through for a first Cincinnati win after coming up empty in five finals. He lost the first set 2-6 and won the second 6-3 when rain stopped the contest for 90 minutes.

When play resumed, Djokovic edged ahead 2-1 in the third, but another storm rolled in and organisers called a halt.

Cincinnati remains the only one of the nine Masters 1000 events that the Serb star hasn't won. He has lifted trophies at least twice at each of the other eight events in the elite ATP series.

Bulgaria's Dimitrov, who has won just one of eight prior encounters with Djokovic, prevailed easily in the opening set and broke early in the second before Djokovic roared back, breaking for a second time to take a 5-3 lead.

The 10th-seeded Serb squared the match as the day's second bout of major rain moved in.

World number one Halep took advantage of an early afternoon respite from the weather to finish off a 4-6, 6-3, 6-3 victory over Ajla Tomljanovic.

Halep, clearly frustrated when the match was halted at 3-3 in the third on Wednesday night, won three straight games to finish off the victory in 10 minutes -- just in time for drizzle to set in.

But the weather cleared long enough for del Potro to polish off a 6-2, 6-3 win over the South Korean to set up a meeting with Australian Nick Kyrgios for a place in the quarter-finals - a match originally set for Thursday night but now on tap for Friday.

Keys fired 55 winners with 44 unforced errors against the German, who is playing her first hardcourt tournament in the buildup to the US Open.

"I had to keep it cool, she gets lot of balls back," Keys said. "I used my forehand and serve well today. I'm really happy and I'm looking to go further."

Petra Kvitova, who toppled Serena Williams in the second round, reached the last eight with a 6-4, 6-2 win over France's Kristina Mladenovic.

"I just need to get out there and really fight, I was telling myself to fight," the two-time Wimbledon champion said.

"I did a lot of talking to myself today, pushing myself to just go for it. I'm glad that in the important points I played aggressively - that was important today."

Novak Djokovic Sloane Stephens Grigor Dimitrov Roger Federer Tennis
Get the latest Cricket news, check out the India cricket schedule, Cricket live score . Like us on Facebook or follow us on Twitter for more sports updates. You can also download the NDTV Cricket app for Android or iOS.