Serena Williams re-established her customary superiority, hammering Daria Gavrilova 6-1, 6-2 to reach the second round of the Cincinnati Masters on Monday. 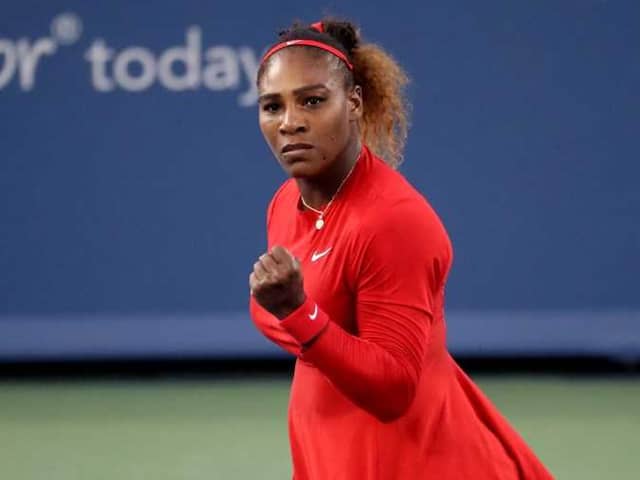 Serena Williams re-established her customary superiority, hammering Daria Gavrilova 6-1, 6-2 to reach the second round of the Cincinnati Masters on Monday. The 23-time Grand Slam champion showed full recovery in her first match since suffering the worst defeat of her career two weeks ago in San Jose when she was crushed 6-1, 6-0 in 51 minutes by British No. 1 Johanna Konta. But the 36-year-old was all business Monday as she cleaned up on Australian Gavrilova, with Williams winning an 11th straight match.

"I definitely felt relaxed after the first break, but you've got to keep going and try to go in for the whole thing."

Though she has not played the tournament in three years, Williams lifted back-to-back titles in 2014 and 2015 after losing the 2013 final to Victoria Azarenka.

Wimbledon champion Novak Djokovic survived a stiff test, needing nine match points to outlast Steve Johnson of the US 6-4, 7-6 (7/4). Djokovic is coming off a third round loss at last week's Toronto tournament.

Murray, returning from January hip surgery, was unable to get past the French 16th seed, hampering his preparations for the US Open starting on August 27

"Physically, I felt okay. It's quick conditions here," Murray said. "He was a little bit sharper than me out there.

"I maybe wasn't reacting as quickly to some shots I would have liked."

Murray last played 11 days ago in a Washington third-round match which took him three hours to win and ended at 3 a.m.

The 31-year-old two-time Wimbledon winner is working his way back slowly and felt he could not subject his body to a quarter-final just over 12 hours later, prompting him to withdraw from that event.

"After Washington, I took four, five days off the tennis court. I did a lot of training, a lot of rehab.

"As the year goes on, I'll be able to get a little bit more consistency like on the practice court and on the tennis court."

Pouille had lost his previous three matches to Murray, the last at Dubai in 2017.

Peter Gojowczyk of Germany defeated Joao Sousa 2-6, 6-4, 7-5 and will next line up against seven-time winner Roger Federer, at second the highest seed in the field after the withdrawal of Rafael Nadal.

Andy Murray Lucas Pouille
Get the latest Cricket news, check out the India cricket schedule, Cricket live score . Like us on Facebook or follow us on Twitter for more sports updates. You can also download the NDTV Cricket app for Android or iOS.