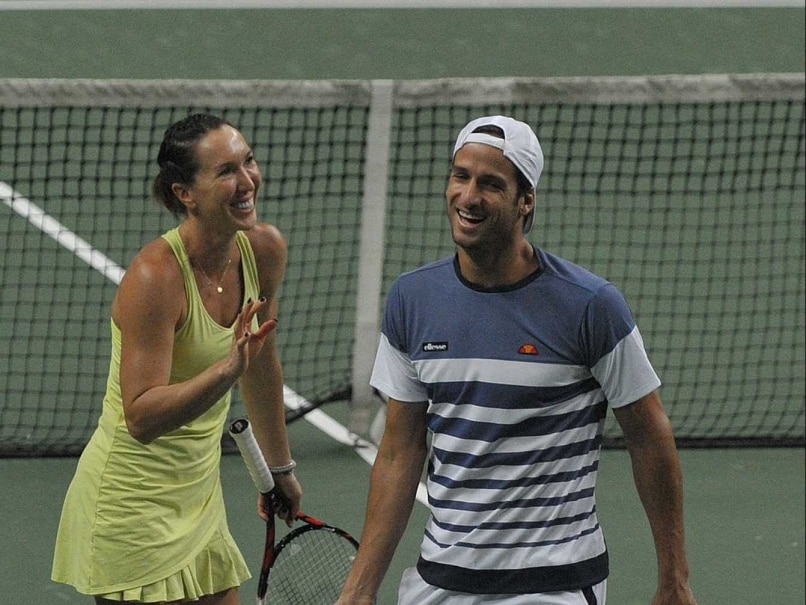 Jelena Jankovic and Feliciano Lopez in action during the Champions Tennis League.© AFP

Though Martina Hingis appeared to be dominating the game for Hyderabad Aces, the gritty Jelena Jankovic succeeded in clinching the game.

In a match of five sets where the winner is decided by the total number of games, Nagpur managed to put up 22 points against the 20 of the host side.

The host side had a comfortable victory in the first set of Legend's Singles with Thomas Johansson of Hyderabad defeating Nagpur's Alex Corretja 5-3.

Though it initially appeared to be a contest between equals, the better-equipped Johansson prevailed over his rival in the end.

The keenly-fought set of the day was between the two former world number one players Martina Hingis for Hyderabad and Jelena Jankovic who showed why they are at the top.

Though the agile Swiss Miss appeared to be dominating the game initially, the gritty Serbian succeeded in clinching the game with a 5-3.

The long rallies between Hingis and Jankovic enthralled the spectators and they lustily cheered the Swiss legend who gave up singles long ago.

The mixed doubles set beween Ivo Karlovic and Martina Hingis of Hyderabad and Nagpur's Feliciano Lopez and Jelena Jankovic was a tight contest with both sides putting up a stiff fight to clinch the honours.

The two sides equalled the score at 4-4 but the Hyderabad's Hingis and Karlovic pulled off a 5-4 victory to give an edge of one point.

The Men's Doubles set between Ivo Karlovic and Jeevan Neduncheziyan (India) and Feliciano Lopez and Divij Sharan was no less in excitement as both sides tried to outsmart each other.

However, Nagpur's players gave their side a slender edge of one point with a 5-3 win as the overall points stood at 17-16.

With both sides engaged in a neck-and-neck competition, the result depended on the final set of the day, Men's Singles, between Ivo Karlovic of Hyderabad and Feliciano Lopez of Nagpur.

Raising suspense on the outcome of the match, Karlovic and Lopez equalled the score at 4-4, resulting in a tie-breaker.

Lopez had the last laugh as he managed to seal the match in his favour with a 5-4 score.