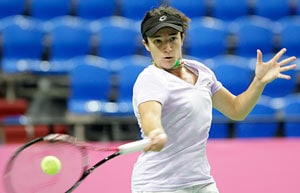 The 31-year-old Brianti broke her opponent five times as Halep lost for the second year in a row in the final of the clay-court tournament.

Brianti quickly built a 5-2 lead before a downpour interrupted the match. Halep did better on her return after the rain had passed and rallied to 5-4, but her opponent won three consecutive points to take the set.

After five straight breaks in the second set, Brianti finally held her serve in the ninth game to close out the match.

"It was a very tough match. Simona is a talented player," said Brianti, who played another final in Guangzhou, China, two years ago.

"We had to stop for the rain but I was able to keep concentrating and win. I was playing good tennis all week, including today. I'm very happy to win my first title."

Halep, who lost to Iveta Benesova in last year's final after coming through the qualifiers, was also chasing her first title.

Brianti was surprised to have done so well in Morocco after playing on indoor hardcourts the week before in Moscow, where Italy lost 5-0 to Russia in the Fed Cup semifinals. And she hadn't won consecutive matches on clay before on the WTA Tour.

"I didn't expect to win the tournament at all," Brianti said. "It's not my favorite surface, but better late than never. I always try to improve my tennis and the last few years I've really been playing the best tennis of my career."

Comments
Topics mentioned in this article
Tennis Alberta Brianti Victoria Azarenka Simona Halep Sara Errani Sabine Lisicki
Get the latest Cricket news, check out the India cricket schedule, Cricket live score . Like us on Facebook or follow us on Twitter for more sports updates. You can also download the NDTV Cricket app for Android or iOS.