Roger Federer and Rafael Nadal were going neck and neck in the first set and produced some of the best tennis shots one could ever dream of seeing but the young boy had his eyes glued to the book in front of him. 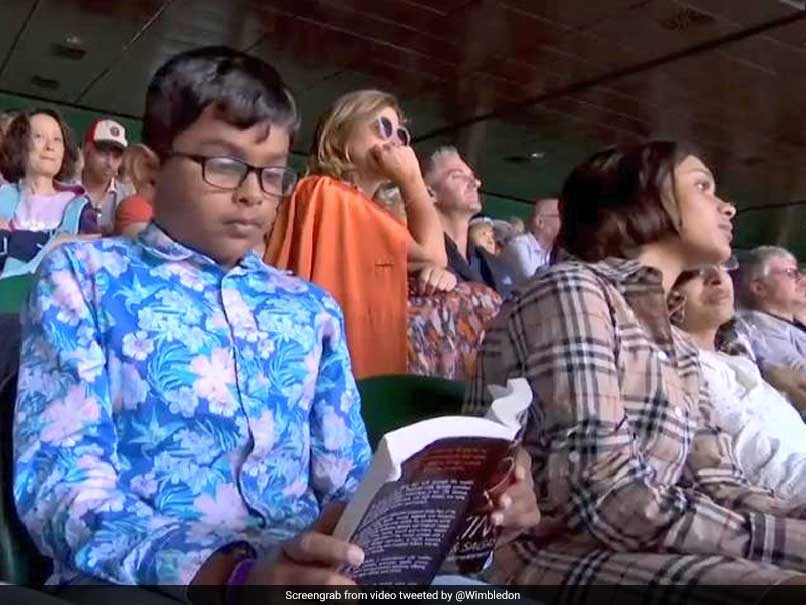 The on-court action wasn't entertaining enough for a kid, who had his head buried in a book.© Screengrab @Wimbledon

Roger Federer reached his 12th Wimbledon final, defeating Rafael Nadal at the All England Club on Friday. The 37-year-old eight-time champion won 7-6 (7/3), 1-6, 6-3, 6-4 in the pair's 40th career meeting to move into his 31st Grand Slam final where he will face defending champion Novak Djokovic. Top seed and four-time winner Djokovic reached his sixth Wimbledon final, and 25th at the majors, with a nervy 6-2, 4-6, 6-3, 6-2 triumph over Spain's 23rd seed Roberto Bautista Agut. As expected, the duel between old rivals Federer and Nadal was a thrilling contest and kept the spectators on the edge of their seats. However, the on-court action wasn't entertaining enough for one spectator, a kid, who had his head buried in a book.

Federer and Nadal were going neck and neck in the first set and produced some of the best tennis shots one could ever dream of seeing but the young boy had his eyes glued to the book in front of him.

2 of if not the greatest players ever and the kid is reading a damn book smh #FedererNadal #Wimbledon pic.twitter.com/0FFosabdFl

Can't believe commentators were giving a kid in the audience flack for reading a book at #Wimbledon - least it wasn't an ipad - kudos to any kid picking up a book these days......#federervsnadal pic.twitter.com/JwM4cnrMNt

The Kid: I love reading books more anything in this world.

Me: That can't be true in every case. What if you're watching Roger Federer vs Rafael Nadal in their first ever #Wimbledon semi-final?

Shout out to the kid in the crowd at the Federer-Nadal match, utterly engrossed in a book

Hope everyone's #SummerReading is going well & that you're not distracted from your goals! You never know where your next favorite reading spot will be!
It's the Federer vs. Nadal semifinal and this kid is reading a book! #goals #Wimbledon @FremdEnglish @ginaenk @FrauSoto99 pic.twitter.com/ULwxX79EWN

What is he reading? He doesn't even lose his concentration when #fedal play. Must be the most interesting book on planet. #Federer #Nadal #Wimbledon. pic.twitter.com/ahY2wobvZ7

Federer is the third oldest man ever to play in a Grand Slam final after 39-year-old Ken Rosewall featured in the 1974 Wimbledon and US Open finals.

"I'm exhausted, it was tough at the end. Rafa played some unbelievable shots to stay in the match, it was a very high level," said Federer.

"The battles with Rafa are always special. The biggest points went my way, there were some tight ones in the long rallies."

"Novak is the defending champion and he has shown that this week," added Federer.

"He has been really solid. I will try and push him to the brink but it will be difficult as it's not for nothing that he is number one.

"But I am very very excited to say the least."

Novak Djokovic
Get the latest updates on India vs South Africa and check out  Schedule, Results and Live Score. Like us on Facebook or follow us on Twitter for more sports updates. You can also download the NDTV Cricket app for Android or iOS.