Australian youngster Bernard Tomic clinched his first ATP Tour title with a fighting win over South African Kevin Anderson in the final of the Sydney International on Saturday. 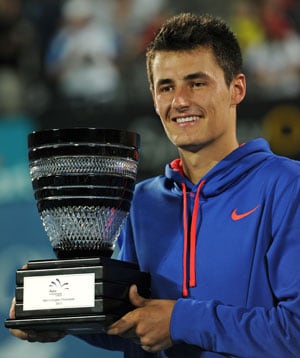 Australian youngster Bernard Tomic clinched his first ATP Tour title with a fighting win over South African Kevin Anderson in the final of the Sydney International on Saturday.

Tomic is the first Australian winner of the Sydney tournament since Lleyton Hewitt in 2005 and the first 20-year-old event winner since Roger Federer in 2002.

He will head into Monday's Australian Open with his ranking down to around 43 and with a chance of facing the 17-time Grand Slam champion and second seed Federer in the third round in Melbourne.

Tomic began confidently breaking Anderson's opening service game and held a further break point in the sixth game before wrapping up the set in 28 minutes.

But he encountered stiffer opposition from Anderson, fighting off a break point on serve in the eighth game before taking to a tiebreaker.

Anderson also had the ascendancy in the tiebreaker with two mini-breaks to level the final at a set all.

Tomic had the Anderson serve under pressure in the fourth game with three break points before breaking the South African in the eighth game on his fourth break point when Anderson double-faulted for the break.

Tomic confidently served out for the match for his first career senior title. It was his second victory over Anderson.

The confident youngster has begun 2013 in blazing style starting with three wins in the mixed teams Hopman Cup, including a triumph in Perth over world number one Novak Djokovic.

Anderson, 26, was the first South African to reach the final of the Sydney International.

He went one better than compatriot Wayne Ferreira, who reached the Sydney semi-final against Carlos Moya in 2004.

Comments
Topics mentioned in this article
Tennis Kevin Anderson Bernard Tomic
Get the latest updates on ICC T20 Worldcup 2022 and CWG 2022 check out the Schedule, Live Score and Medals Tally. Like us on Facebook or follow us on Twitter for more sports updates. You can also download the NDTV Cricket app for Android or iOS.