Julien Benneteau was among three French winners in the opening round of the Paris Masters on Monday, downing Victor Troicki of Serbia 6-4, 7-5 to set up a match against countryman Jo-Wilfried Tsonga. 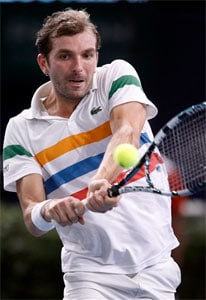 Julien Benneteau was among three French winners in the opening round of the Paris Masters on Monday, downing Victor Troicki of Serbia 6-4, 7-5 to set up a match against countryman Jo-Wilfried Tsonga.

Benneteau broke twice in each set despite Troicki serving 14 aces.

Tsonga, seeded sixth and the 2008 champion, is among the favorites for the event.

Novak Djokovic might withdraw to ensure he is fit for the World Tour Finals in London next week. The Serb, who has clinched the year-end No. 1 ranking, canceled a meet-and-greet session with fans on Monday as he wasn't "feeling well."

The tournament is already without defending champion Roger Federer, who pulled out Sunday to rest before the season-ending event.

U.S. Open winner Andy Murray, who recently lost the Shanghai Masters final to Djokovic, will play on Wednesday and is feeling fit.

"I had a full week of rest after Shanghai, which I needed," Murray said. "I've had a pretty decent preparation for the tournament, which is good.

"It doesn't make sense to come and save energy. Having a full week of rest at this stage of the season is something that in the past I hadn't really had, so I feel so much fresher coming into Paris than I had done the last few years. I'll try to play my best this week and then see what happens in London. I feel better at this stage of the year compared with last year."

In other first-round action, Andrea Seppi twice came back from the brink of defeat to beat Martin Klizan of Slovakia 6-2, 2-6, 7-6 (5).

The Italian was 5-2 down in the final set and trailed by the same score in the tiebreaker. He will play 2005 winner Tomas Berdych, who is seeded fifth.

Kevin Anderson, Jerzy Janowicz, Alejandro Falla, Marcel Granollers and Albert Ramos are also through to the second round.