Former World No1 Novak Djokovic lost to Chung Hyeong in straight sets in the fourth round. 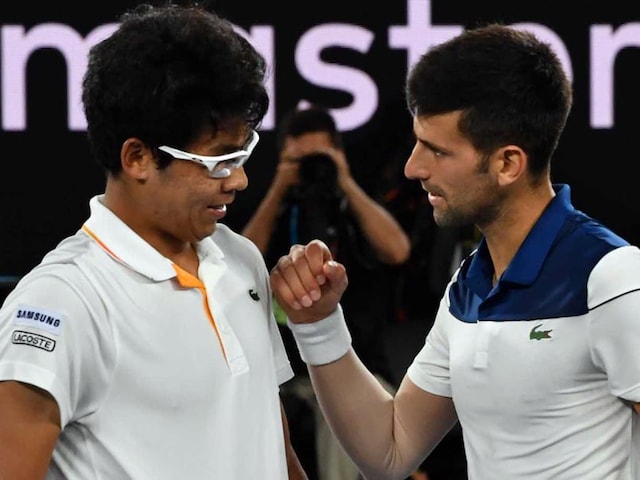 Djokovic, who sought treatment for his troublesome right elbow and an apparent hip injury when stretching for a ball, battled through in great discomfort, as Chung stayed composed and mentally tough to claim his biggest win.

"I didn't know if I was going to win this match tonight, but I was just honoured to play with Novak again," said Chung.

"When I was young I was trying to copy Novak because he's my idol. I can't believe this, the dream's come true tonight."

Djokovic showed the effects of playing four rounds in his first tournament back after six months out since Wimbledon with elbow trouble.

He made a horror start to the match with two double faults in each of his two opening service games for a double break.

The six-time Melbourne winner clawed back to 5-5, but he called for the trainer to treat his right elbow early in the second set.

It got worse for the Serb former world No.1 as he screamed in agony stretching for a point, but he gingerly carried on with the signs of wear and tear plainly visible.

Djokovic attempted to shorten the points and avoid long tiring rallies given his battle-weary condition as Chung continued to pull ahead.

He dropped serve to start the third set but Djokovic gave the serve straight back and the South Korean got another break to go ahead 3-1.

But Djokovic bravely dug in and again broke back and took the set to a tiebreaker where Chung won some outstanding points to hold three match points.

Djokovic's resistance was finally over when he sent a backhand wide.

Comments
Topics mentioned in this article
Novak Djokovic Hyeon Chung Tennis
Get the latest Cricket news, check out the India cricket schedule, Cricket live score . Like us on Facebook or follow us on Twitter for more sports updates. You can also download the NDTV Cricket app for Android or iOS.