Rafael Nadal had accidentally hit a ballkid on her head during his straight sets victory over Argentina'sFederico Delbonis on Thursday. 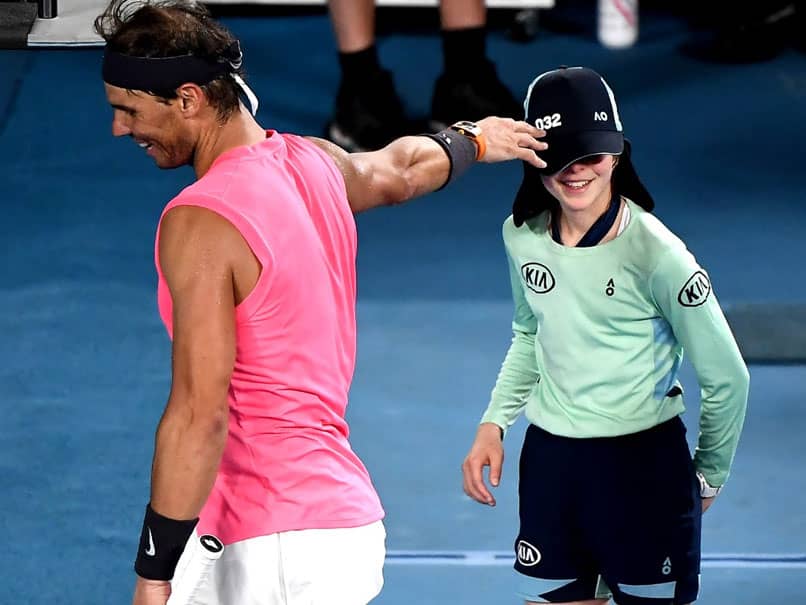 Rafael Nadal, world number one tennis player, displayed a heartwarming gesture during his straight-sets victory over Federico Delbonis of Argentina in the second round of Australian Open on Thursday. In the second set, top-seeded Rafael Nadal accidentally hit a ballkid on her head. Rafael Nadal rushed over to console her and gave her a kiss. The Australian Open's official Twitter handle posted a video of the heartwarming gesture by Rafael Nadal after the Spanish star breezed past the Argentinian 6-3, 7-6 (7/4), 6-1 at the Rod Laver Arena in Melbourne.

Earlier, the 33-year-old Nadal had defeated Bolivia's Hugo Dellien in straight sets in the first round on Tuesday.

After the victory on Thursday, Nadal said that he lost numerous opportunities but managed to get over the line in the second set that ended in a tie-break.

"It was a tough match. I lost a lot of opportunities on break point but found a way to finally win the second set," he said.

"In the third I was more relaxed, more aggressive and found better play in that set."

Nadal had dropped only 10 games in three previous emphatic wins over 76th-ranked Delbonis, and defeat was never on the cards at Melbourne Park.

But the Argentine, whose best Grand Slam result was the third round in Melbourne in 2016, made life hard for the 19-time Grand Slam winner, fending off 16 break point chances.

Speaking on the ballkid incident, Nadal said he was scared for her as the ball hit her straight on the head.

"For her it was not a good moment, I was so scared for her, the ball was quick and straight on her. I'm very happy she is good. She is brave. Well done," Nadal added.

Comments
Topics mentioned in this article
Rafael Nadal Tennis
Get the latest updates on India vs Australia Series, check out the India vs Australia Schedule for 2020-21 and Ind vs Aus live score . Like us on Facebook or follow us on Twitter for more sports updates. You can also download the NDTV Cricket app for Android or iOS.