French tennis player Elliot Benchetrit has landed himself in a spot after asking a ballkid to peel his banana. 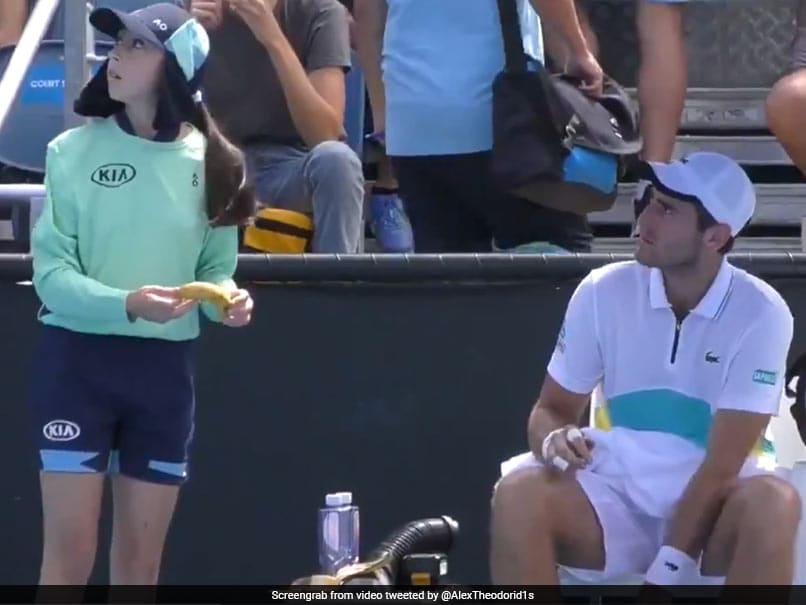 The umpire asked the ballkid to return the banana to Elliot Benchetrit.© Twitter

French tennis player Elliot Benchetrit  was told off by the match umpire after he asked a ballkid to peel a banana. In a video shared by tennis writer Alex Theodoridis, a young ballgirl is seen holding the banana and looking up at match umpire John Blom before giving it to Benchetrit. The Frenchman is then seen engaged in a discussion with the umpire before trying to peel it open with his mouth. He then continues to talk to the umpire before tossing the banana back in his bag.

So this is the moment where Elliot Benchetrit asks the ballkid to peel his banana. I'm glad the umpire (John Blom) stepped in and told him off," Alex Theodoridis tweeted along with the video.

So this is the moment where Elliot Benchetrit asks the ballkid to peel his banana. I'm glad the umpire (John Blom) stepped in and told him off. pic.twitter.com/TK1GET68pG

Tennis great Martina Navratilova applauded the umpire's actions on Twitter as well. She re-tweeted Theodoridis' video, writing "What's next- grapes? #entitlement John did the right thing, that's for sure."

What's next- grapes?#entitlement
John did the right thing, that's for sure https://t.co/VuViqZLdrA

The incident took place in his qualifier against Dmitry Popko. Benchetrit was facing some trouble in peeling the fruit as his hand was bandaged, news agency AFP reported.

Twitter users were left angered by the 21-year-old's behaviour.

"Too pathetic," a user commented.

"Who does he think he is?" wrote another.

"That video is really useless and it's not even showing a little part of what happened ! Poor guys , social media take your stupidity to an other level!" Benchetrit tweeted in response to Navratilova.

Benchetrit went on to come back from a set down to beat his opponent 4-6, 6-2, 6-3. He is set to take on Japan's Yuichi Sugita on Tuesday.

Comments
Topics mentioned in this article
Elliot Benchetrit Tennis
Get the latest updates on IPL Auction 2023 and check out  IPL 2023 and Live Cricket Score. Like us on Facebook or follow us on Twitter for more sports updates. You can also download the NDTV Cricket app for Android or iOS.