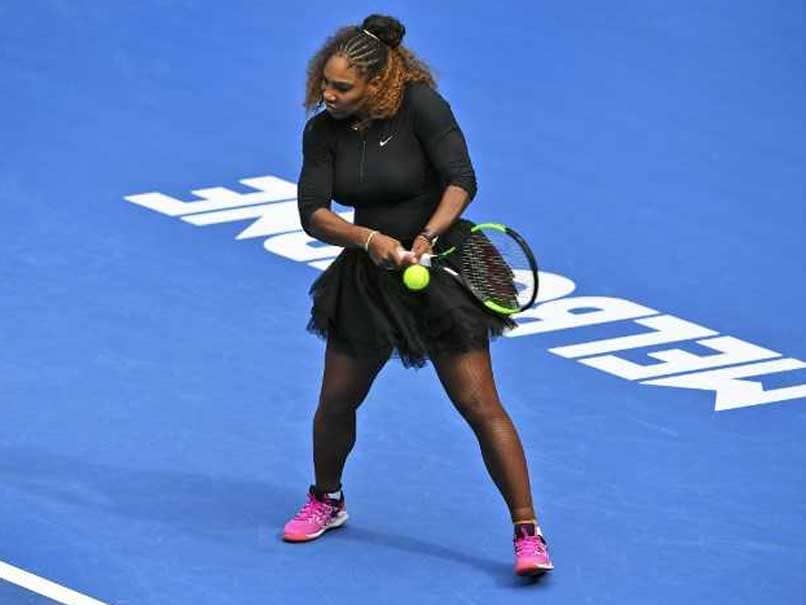 Serena Williams has adopted a low profile ahead of the Australian Open, but rival players admit the American's shadow looms large in Melbourne as she eyes a record-equalling 24th Grand Slam crown. Williams won her 23rd title and seventh at Melbourne Park while eight weeks pregnant two years ago, and now attempts to match Margaret Court's mark of 24 singles majors on the Australian's home soil. The 37-year-old's last outing on tour was her meltdown in losing the US Open final to Naomi Osaka in September and she enters the season-opening Slam as the 16th seed.

Yet she has proved in the past that such numbers mean little to her and Osaka said most in the locker room believed the veteran remains the one to beat in Melbourne.

"I'm pretty sure (that's the case)," said the Japanese star.

"But there's a group of players that I think everyone thinks is very difficult to play against, especially in Grand Slams," Osaka added.

Serena's 2017 triumph Down Under gave her the outright Open-era record for singles majors ahead of Steffi Graf's 22, leaving only Court's tally of 24 titles -- 13 of which were earned in the amateur era before 1968 -- for her to chase.

Defending champion Caroline Wozniacki admitted Serena, already hailed by many as the greatest of all time, was an unknown quantity in Melbourne after sitting out the end of the 2018 season following the US Open blow-up.

"I haven't seen her play a match, so I don't really know," Wozniacki responded when quizzed about the American's form.

The Danish third seed preferred to concentrate on her own prospects, dismissing concerns health problems were affecting her game.

She achieved a career milestone last year to claim her maiden Grand Slam at Melbourne Park, but also revealed she was suffering the debilitating auto-immune condition rheumatoid arthritis.

But the 28-year-old insisted she was managing her illness and was relishing the prospect of defending her crown.

"All I can say is that I feel good. I feel like I'm hitting the ball well," she said.

Wozniacki's vanquished opponent in last year's final, Simona Halep, arrives in Australia with the world number one ranking and her confidence overflowing after winning the French Open.

The Romanian said she was untroubled by the back injury that curtailed her 2018 season and was mentally stronger as a result of last year's loss in the decider.

"I didn't want to think that much about that match because it was really painful to lose it, but I learned some things from that match," she said.

"Now I know how to manage better if that happens again."

Second-ranked Angelique Kerber has already indicated her priority for 2019 will be the French Open, the only Slam to elude the 30-year-old German in her career.

Osaka is the leading contender among the younger generation of players, warming up for Melbourne by making the semi-finals of the Brisbane International.

While the 21-year-old has appeared level-headed since her breakthrough at Flushing Meadows, she said she was still getting used to the spotlight.

"For me one of my biggest goals is to be more mature, like to mature as a person," the fourth seed said.

"I feel like in a way I am, but in other parts I'm very, like, three years old mentality, you know? I feel like just levelling that out is one of my biggest goals I had during the off-season."

Local hopes will rest on Ashleigh Barty after the 22-year-old Queenslander went on a seven-match winning streak before losing the final of the Sydney International to Czech Petra Kvitova on Saturday.

Maria Sharapova has failed to impress since returning from a doping ban and, now ranked 30, is looking some way from the player who won five Grand Slams.

Two-time major champion and former number one Garbine Muguruza was another who had an injury-blighted 2018 which saw her drop out of the top 10.

Comments
Topics mentioned in this article
Serena Williams Venus Williams Maria Sharapova Tennis Simona Halep Angelique Kerber Petra Kvitova
Get the latest updates on IPL 2020, check out the IPL Schedule for 2020 and Indian Premier League (IPL) Cricket live score . Like us on Facebook or follow us on Twitter for more sports updates. You can also download the NDTV Cricket app for Android or iOS.