Veteran Leander Paes and Purav Raja fought off a match point to shock formidable fifth seeds Bruno Soares and Jamie Murray and progress to the men's doubles third round at the Australian Open on Saturday. 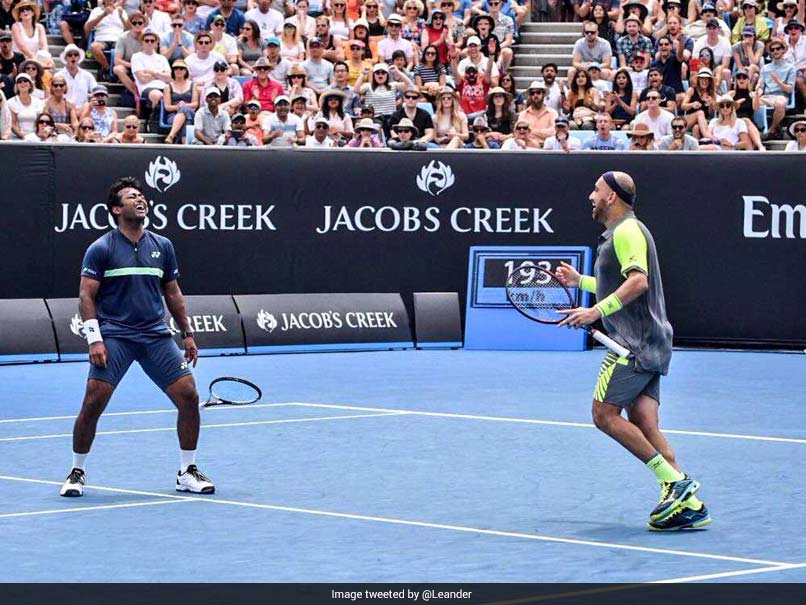 Indian tennis stars Leander Paes and Purav Raja were at the net on Saturday to create the first upset in the men's doubles at the Australian Open, overcoming fifth seeded Jamie Murray (Britain) and Bruno Soares (Brazil) 7-6 (7-3), 5-7, 7-6 (8-6) in a three-hour battle on a day when the temperature here cooled down considerably to a pleasant 25 degrees. The victory coming after the pair's win against Nikoloz Basailashvli of Georgia and Andreas Haider-Maurer in the first round sets them up with a chance to reach the higher levels of the tournament. Paes and Raja controlled the net with some incredible placings and interceptions which initially upset the top ranking pair. They served with precision and combined well at the net to first confuse and then volley with precision to keep the marauding Soares and Murray at bay.

"Yes, they played well at the net but we matched them in every way. But today they played really well," Bruno Soares said after the match.

A full crowd on court number three most of them cheering for Jamie, saw a match that reached the heights of court craft, sheer cunning, and audacious touches and lobs. Often Paes could be seen pointing to his head as if it needed explaining where the origin of his latest delectable angle lay.

As the match wore on Raja too gained in confidence, serving well and pushing Soares back with some lobs. He perfected his returns too, sending a wide Soares serve in the 3rd set down the line like a tracer bullet that kissed the lines.

The Indian pair got in 67 % of their first serves in. There were long rallies in the match, one of them lasting 18 shots, showing how both teams drew out the best in court craft and high cunning.

"We kept creating chances, they kept on showing their class, we kept going at them, they kept coming back. Purav did get a lot of credit back in the locker room where guys were watching the match," said Paes.

The Indian veteran agreed that it was a emotionally charged match and he had to go back a year or two to recount matches of this nature, including the Davis Cup tie against South Korea where he first partnered Raja.

Paes said that with their level of play rising, after playing in the Challenger circuit watched by "two men and two spiders" he expects them to be in the top ten ranking soon enough.

"Our camaraderie counts, we live close to each other in Mumbai and we work out together and all that shows when the match is poised at 6-6," he said.

Paes at 44 and Raja at 32 are the oldest pair in the tournament.

Comments
Topics mentioned in this article
Leander Paes Purav Raja Jamie Murray Bruno Soares Tennis
Get the latest updates on India vs England Series, India vs England , live score and IPL 2021 Auction . Like us on Facebook or follow us on Twitter for more sports updates. You can also download the NDTV Cricket app for Android or iOS.