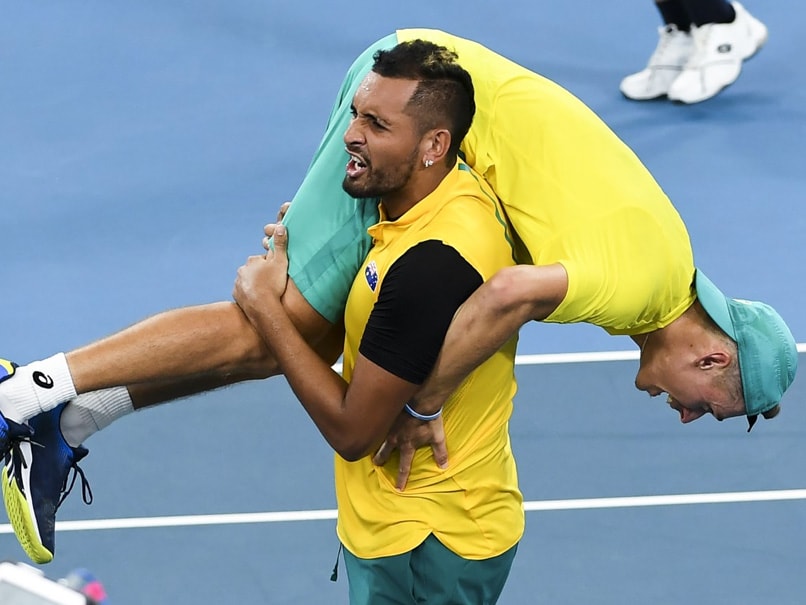 A dynamic Nick Kyrgios and dogged Alex de Minaur powered Australia into the ATP Cup semi-finals on Thursday with an epic 2-1 win over the Tim Henman-led Britain. The home team clinched the tie after an 18-16 third-set tiebreaker in the doubles to set up a potential blockbuster last-four clash against Rafael Nadal's Davis Cup-winning Spain who face Belgium on Friday. Kyrgios crushed Cameron Norrie in the opening singles 6-2, 6-2 before Dan Evans came through a memorable showdown against De Minaur 7-6 (7/4), 4-6, 7-6 (7/2) to set up the decisive, winner-takes-all, doubles.

Australian captain Lleyton Hewitt took a huge gamble by dropping regular doubles pair John Peers and Chris Guccione in favour of Kyrgios and de Minaur and it looked a poor decision when they lost the first set 6-3.

But spurred by Kyrgios' booming serve they took the next 6-3 before a nailbiting tiebreaker that lasted more than half-an-hour.

Jamie Murray and Joe Salisbury had four match points, which were all saved, with Australia finally converting on their fifth match point, sparking jubilant scenes.

"That was incredible tennis. All three matches today everyone gave 100 percent and left it all out on the court," said Hewitt.

"Really proud of the boys, the way they were able to turn it around... it could have gone either way."

The tie was notable for Evans' clash with world number 18 De Minaur, a three-hour 23-minute contest that is a contender for match of the tournament.

- 'Skin of teeth' -
After Evans took the opening set in a tense tiebreaker, De Minaur fought back to grab the second.

He went 4-2 behind in a see-sawing third but rallied again as they exchanged service breaks with the Australian showing nerves of steel to save four match points and take it to another tiebreak, which the exhausted Briton finally won

"That's about as good as I've got really and I only got through by the skin of my teeth," said Evans, ranked 42.

"I sneaked it and this is what team competition is always about, particularly Britain and Australia, it's always a great rivalry and there's been great spirit."

A composed Kyrgios beat world number six Stefanos Tsitsipas on Tuesday and carried that momentum into his clash against Norrie.

The mercurial Australian has been a model of concentration and focus at the ATP Cup as he thrives in the team environment.

It is partly due to having a six-month suspended ban hanging over him, imposed in September for calling an Irish umpire a "potato" and a "tool" in Cincinnati.

He also accused the ATP of being corrupt before backtracking on the allegation.

"We've got each others' backs. I love the team event. Rusty (Hewitt) is the best captain, the teammates have been supporting each other, being there for each other and that's paid off," Kyrgios said.

Despite his flaws, Kyrgios' flamboyance and natural talent shone brightly against an error-riddled Norrie.

He played some glorious drop shots, served beautifully and exhibited his rocket-like forehand in front of a vocal crowd at Ken Rosewall Arena.

Comments
Topics mentioned in this article
Nick Kyrgios Tennis
Get the latest updates on ICC Women's Cricket World Cup 2022 and IPL 2022, check out the Schedule , Live Score and IPL Points Table. Like us on Facebook or follow us on Twitter for more sports updates. You can also download the NDTV Cricket app for Android or iOS.