Matteo Berrettini arrived in London at a career-high number eight in the ATP rankings after starting the season outside of the top 50. 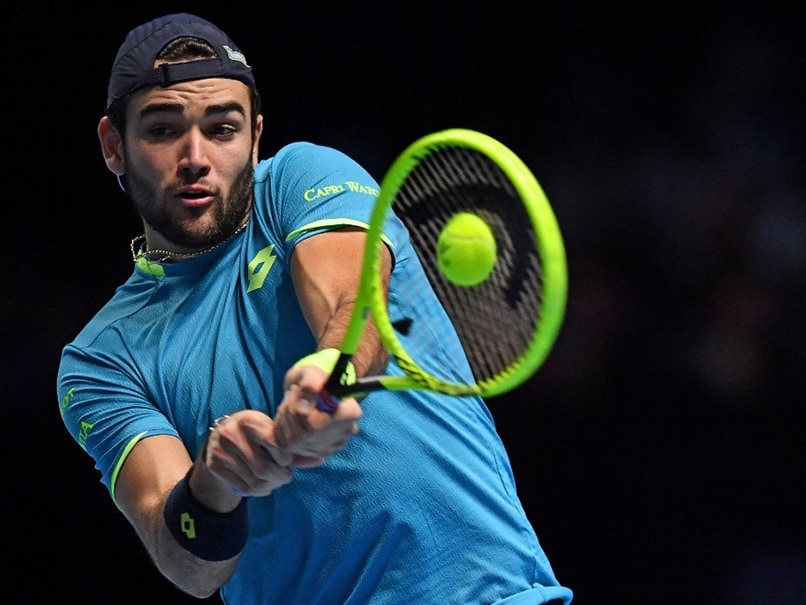 Matteo Berrettini became the first Italian to win a match at the season-ending championships.© AFP

Novak Djokovic and Roger Federer prepared to face off for a place in the last four of the ATP Finals on Thursday after Matteo Berrettini made history with a consolation win in London. The heavyweights, who have won the season-ending tournament 11 times between them, will meet for the 49th time in a repeat of this year's Wimbledon final. Djokovic, who holds a 26-22 advantage, has won their past five meetings, including their epic five-set battle in the final at Wimbledon in July, during which he saved two championship points.

The Serbian is bidding to equal Federer's record of six ATP Finals titles and is also challenging Rafael Nadal for the year-end number one ranking.

The second seed, 32, will leapfrog Nadal to finish in the top spot if he wins the title at the O2 Arena and Nadal does not reach the final.

The Serbian, who can claim a record-equalling sixth year-end number one finish, is hungry to finish the year on top.

"One of the two biggest achievements that you can have as a professional competitive tennis player is winning a Grand Slam and being number one in the world at the end of the season," he said before the tournament started.

Federer was asked earlier this week whether the Wimbledon defeat had left emotional or mental scars.

"We'll find out, but I think it's all flushed away from my side," said the 38-year-old. "A lot of water has gone under the bridge since then."

He added: "Actually, it's good for me to play him again, and maybe that all helps to get a chance to get him back or whatever it is, but at the end of the day, I'm here for the World Tour Finals and not because of the Wimbledon finals."

In doing so, the 23-year-old became the first Italian to win a match at the season-ending championships.

Berrettini finished with a 1-2 record this week. Thiem had already qualified for the semi-finals after his win on Tuesday against Djokovic.

Berrettini arrived in London at a career-high number eight in the ATP rankings after starting the season outside of the top 50.

"I always had great fights against (Thiem)," said the Italian. "I was able to stay mentally focused, especially in the first set.

"I played a great tie-break, so I'm very happy with my performance."

Fifth-seed Thiem did not hit the heights he reached during his three-set win against Djokovic, notching just 12 winners compared with 50 against the Serbian.