Andy Murray and Novak Djokovic shared an Instagram Live chat where they discussed their rivalry. 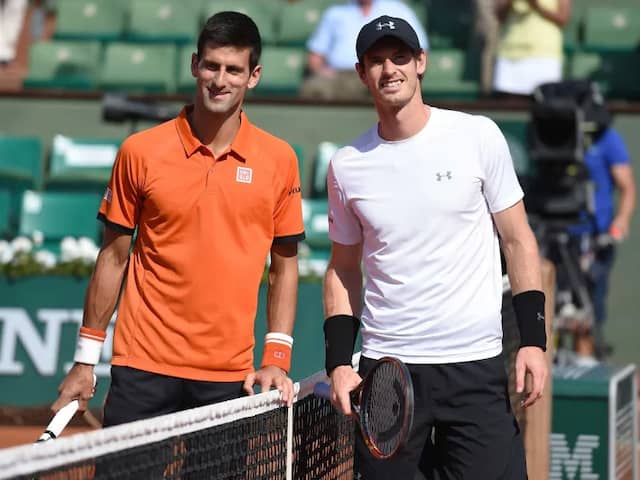 Novak Djokovic has long had the upper hand on Andy Murray.© AFP

Andy Murray admits that his Roland Garros final defeat in 2016 to lifetime rival Novak Djokovic remains one of his most shattering losses. Djokovic triumphed in Paris, 3-6, 6-1, 6-2, 6-4 to capture his first and only French Open title. On Friday, Murray and Djokovic shared an Instagram Live chat where they discussed a rivalry which began in childhood and is still going strong in their early 30s. "If I could change one result, I obviously would have loved to win the Australian Open or the French Open, but as a challenge for me, because clay was such a tough surface for me throughout my career," Murray told the world number one during the link-up.

"Just in the terms of the way I played on clay it was the hardest one for me to adapt to.

"That would have been my biggest achievement for me if I would have won the French.

"Australia has been pretty painful for me thanks to you over the years. If I could change one I would take the French Open off you."

Djokovic has long had the upper hand on Murray.

He leads their head-to-head 25-11 and has 17 Grand Slam titles to the Briton's three.

However, Murray does possess two Olympic gold medals from London in 2012 and Rio in 2016.

He defeated Djokovic in the semi-finals in London on his way to the title.

"I felt like a played well overall, but you beat me in the London Olympics in the semis, 7-5, 7-5," Djokovic said.

"I still felt like we both played very well, I felt the quality of the match was pretty good, you were just better in the decisive moments of the sets.

"Of course I was devastated when I lost because it was Olympic Games, but I was happy with the way I played."