Sun Yang, who was accused of refusing to provide blood and urine samples when drug testers visited his home in China in September 2018, vowed to appeal the ruling. 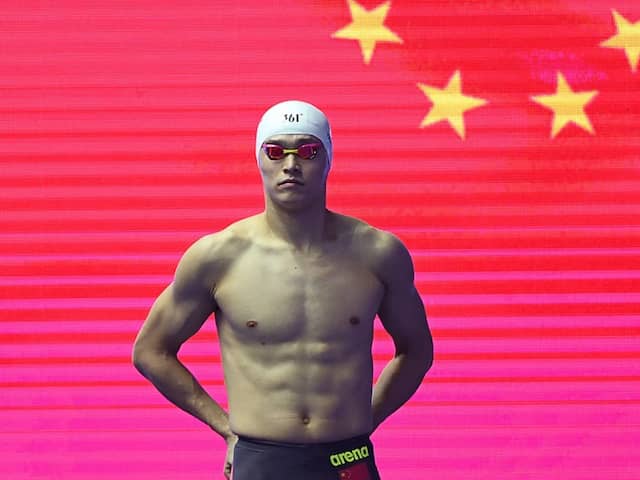 Sun Yang has been found guilty of refusing to give a doping sample and banned for eight years.© AFP

China's triple Olympic swimming gold medallist Sun Yang has been found guilty of refusing to give a doping sample and banned for eight years in an eagerly-awaited judgement from the Court of Arbitration for Sport (CAS) on Friday. The Swiss-based CAS upheld the appeal by the World Anti-Doping Agency (WADA) against the international swimming federation (FINA) and Sun, one of China's most recognisable athletes who had already served a doping ban in 2014. Sun, who was accused of refusing to provide blood and urine samples when drug testers visited his home in China in September 2018, vowed to appeal the ruling, while WADA hailed the ban as a "significant result".

"This is unfair. I firmly believe in my innocence," Sun told China's Xinhua news agency. "I will definitely appeal to let more people know the truth."

Any appeal would be at the Swiss federal court.

A vial of Sun's own blood sample was smashed with a hammer during the testing session in 2018, but the swimmer was acquitted by FINA of anti-doping violations, agreeing that testers had failed to produce adequate identification.

But the ruling outraged WADA which took the matter to CAS, demanding a ban of between two and eight years for missing the out-of-competition test.

CAS said its panel had "unanimously determined" that Sun had tampered with his doping control. Taking into consideration his previous doping ban, CAS said it had imposed the stiffest eight-year sanction, meaning the 28-year-old will miss this summer's Tokyo Olympics.

"The athlete failed to establish that he had a compelling justification to destroy his sample collection containers and forego the doping control when, in his opinion, the collection protocol was not in compliance with the ISTI (International Standard for Testing and Investigations)," CAS said.

"It is one thing, having provided a blood sample, to question the accreditation of the testing personnel while keeping the intact samples in the possession of the testing authorities; it is quite another thing, after lengthy exchanges and warnings as to the consequences, to act in such a way that results in destroying the sample containers, thereby eliminating any chance of testing the sample at a later stage."

The Chinese Swimming Association (CSA) expressed its "deep regret" at the CAS ruling, reiterating Sun's defence that the doping testers who went to his home were not qualified to do the job.

The CSA said the testers were "personnel without professional training and legal qualification to collect athlete samples, and the activity was illegal and invalid".

"We support Sun Yang to continue to safeguard his legitimate rights and interests by legal means," it said.

"At the same time, it is hoped that WADA, sports organisations and doping inspection agencies will improve and perfect the rules, strictly implement the rules, including the certification requirements for doping inspectors and not ignore the legitimate rights of athletes."

"WADA decided to appeal the original FINA ruling having carefully reviewed it and having concluded that there were a number of points that seemed to be incorrect under the (World Anti-Doping) Code.

"Today's CAS ruling confirms those concerns and is a significant result."

After that initial clearance by FINA Sun was able to compete in the World Championships in Gwangju, South Korea, in July, where he won two golds but became a focus of protests from rivals, especially from Australia.

CAS ruled that his results from Gwangju would stand "in the absence of any evidence that the athlete may have engaged in doping activity since 4 September 2018".