World Anti-Doping Agency (WADA) have appealed the findings of the FINA doping panel's report, dated January 3, that decided Sun Yang did not commit a doping violation. 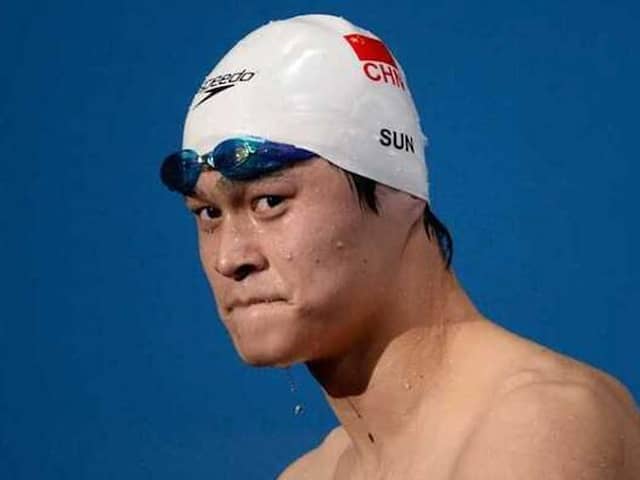 Sun Yang is facing a lifetime ban if the Court of Arbitration for Sport rules against him.© AFP

China's controversial swimming star Sun Yang used a hammer to destroy his own blood sample, according to an explosive FINA doping panel report obtained by Australia's Sunday Telegraph. The triple Olympic champion and a security guard smashed vials of blood collected after independent testers visited the athlete's villa in Zhejiang Province last September, the newspaper reported Saturday, citing the panel's previously unpublished 59-page dossier. Sun was cleared by swimming's governing body FINA to compete at next week's world championships in South Korea, triggering anger among rivals who feel he should be booted out. World Anti-Doping Agency (WADA) have appealed the findings of the FINA doping panel's report, dated January 3, that decided Sun did not commit a doping violation.

Among the astonishing points of the FINA doping panel's report seen by the Sunday Telegraph were witness claims that "Sun's mother asked a guard to bring a hammer into the doping control room".

It goes on to describe how Sun and China team doctor Ba Zhen "proposed that the secure blood container be broken with a hammer to access the blood vial and thus destroy the integrity of the blood samples that had been taken."

Sun, facing a lifetime ban if the Court of Arbitration for Sport rules against him, was cleared on a technicality, according to the Sunday Telegraph, reporting the FINA doping panel accused the giant swimmer of taking a "foolish gamble" with his career.

"It is far more prudent to comply with the directions of a DCO (doping control officer) and provide a sample in every case ... rather than risk any chance of an asserted violation," it notes in a caution to the athlete.

"Staking an entire athletic career on being correct when the issue is complex and contentious is a huge and foolish gamble."

Among the doping panel's report obtained by the Sunday Telegraph, FINA witnesses state a female DCO arrived with two assistants on the night of September 4 last year to collect blood and urine samples.

It added that at Sun's insistence "the DCA was excluded from the doping control station" at a clubhouse near the swimmer's villa.

Sun reportedly gave a blood sample but refused a urine sample and the FINA report notes that after Ba arrived at 1am "tensions quickly escalate" when he accused the main doping control officer of also lacking proper qualifications.

Ba refused to allow any of Sun's samples to be removed, according to the report, despite warnings that they would be in violation of doping rules before, witnesses claim, Sun's mother called for a hammer.

"The DCO heard the sound of glass breaking," the dossier read, according to the Sunday Telegraph.

"She discovered that the athlete and a guard had broken one of the secure sample containers with a hammer."

The report also noted that Sun's team of doctors concluded "the blood nurse (was) not sufficiently qualified under Chinese hospital rules and there was no fault when Sun left the main control room on several occasions" because he did so "with the DCO's knowledge."

The Sunday Telegraph cited the panel's report that Sun was let off with just a "serious rebuke" as he escaped on a technicality over documentation, although the swimmer's lawyers insist he broke no rules.

Sun has clashed with rivals in the past after secretly serving a three-month ban in 2014 for taking a banned substance he claimed was for a heart condition.

Australian Mack Horton labelled him a "drug cheat" before pipping Sun to gold in the 400 metres freestyle at the 2016 Rio Olympics.

FINA were not immediately available to comment on the leaked report but told AFP "FINA doping panel reports are generally confidential."