A wet outfield caused by persistent rain washed out two entire sessions on the opening day of the series-deciding final Test between India and Sri Lanka in Colombo. Just 75 minutes of play was possible before lunch. Catch all the highlights here. 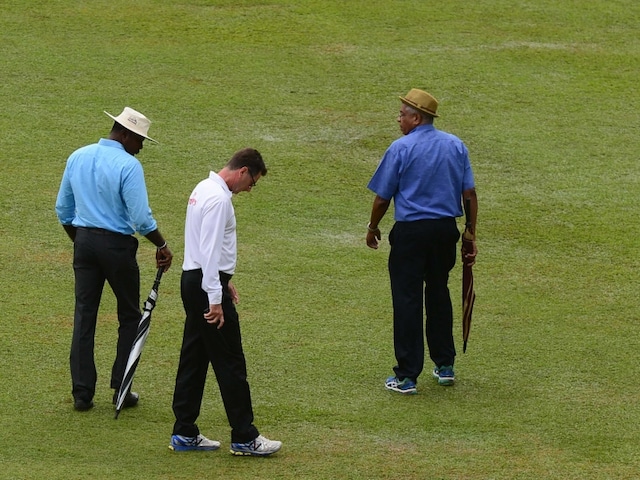 Sri Lanka grabbed two early Indian wickets before rain cut short the morning session on the opening day of the final Test. India slipped to 14-2 in the fourth over before moving to 50 without further loss before heavy rain played spoilsport. Catch all the highlights here: (Scorecard | Photos)

1552 hrs IST! That's it. Persistent rain has forced play to be called off for the day. It will be interesting to see how the pitch plays on Day 2 and whether it will have any spice, now that there has been plenty of water underneath the covers.

1520 hrs IST: It's not raining at the moment and umpires will have an inspection at 1530 hrs IST.

1450 hrs IST: Conditions seem to have gotten better. Almost all covers have been removed. The umpires are assessing the outfield now.

1440 hrs IST: Rain has stopped at the moment and tea has been taken. Not a single ball was bowled in the second session. Umpires will inspect the conditions during the break. India 50 for two in 15 overs.

1419 hrs IST: Rain, rain and more rain. The full ground is covered and it is collecting more and more water. So it's almost a full session lost in the day and chances of play resuming anytime soon look bleak.

1350 hrs IST: Rain is back at the SSC Colombo and the ground is covered again. Groundsmen pull the covers to cover the ground as the match was stopped due to rain on the first day of third and final Test.

1335 hrs IST: Covers are coming off but it will be a long process. First the groundsmen will remove the excess water from the covers and then super sopper will come into play.

1317 hrs IST: Good news is that it has stopped raining and umpires are out on the field. Umpire Rod Tucker says "It should take at least an hour to clear the water off the covers."

1220 hrs IST: It has stopped raining at Colombo. Groundsmen are in no hurry to remove the covers. 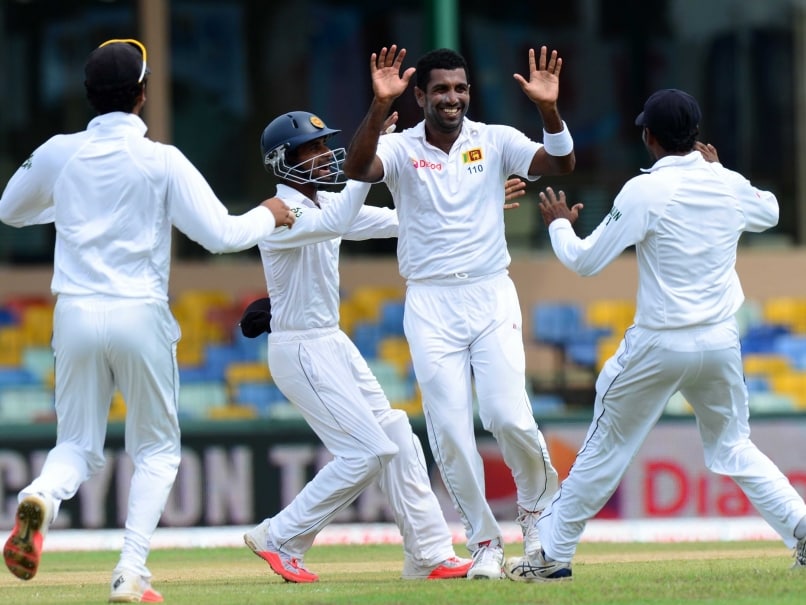 1145 hrs IST: It's absolutely pouring down in Colombo and umpires have decided to take an early lunch. It has been a good disciplined performance by the Sri Lankans. Prasad and Pradeep kept a tight line going while Mathews was at his economical best. Herath has come on for a solitary over but there is nothing in the pitch as of now which suggests that there could be something for the spinner. But there is some inconsistent bounce and once play resumes, this rain could spice the track up. The lunch break should end by 1225 hrs IST.

1118 hrs IST: Heavy rain stops play at SSC Colombo and covers are on. India 50 for two in 15 overs with Cheteshwar Pujara batting on 19 and Virat Kohli on 14.

1103 hrs IST: DRINKS BREAK! Dhammika Prasad and Nuwan Pradeep have bowled brilliantly to push India on the back foot. Cheteshwar Pujara and Virat Kohli have been watchful after India were reduced to 14 for two when both KL Rahul and Ajinkya Rahane fell inside four overs.

1043 hrs IST: DROPPED! Virat Kohli dropped on eight by keeper Kusal Perera off Nuwan Pradeep. Kohli looks to defend but the ball nips back in, takes the inside edge. Perera dives to his left to take a regulation catch but the ball hits his left arm. Worse, it goes back and hits the helmet. 5 penalty runs signalled.

1022 hrs IST: WICKET! Ajinkya Rahane falls for 8. Umpire Nigel Llong hardly takes a second in raising his finger on that appeal. But Rahane looks disappointed. Nuwan Pradeep bowls a good ball, full outside off, at good pace, 140 kph, Rahane misses his straight drive, more due to the length and swing and is hit on the pads. Pradeep appeals and the response is simultaneous. However, replays show that the ball might have gone down the leg side. Tough luck.

1003 hrs IST: WICKET! KL Rahul out after scoring just two runs. What-a-ball. This is not a misjudgement from Rahul. It is just pure movement off the surface. Dhammika Prasad bowls a terrific delivery. On a good length wide outside off, Rahul shoulders arms, thinking it will not have great damage. But he is proved wrong. The ball pitches, then moves in a mile and hits the top of off stump. Nothing much Rahul could have done, apart from probably, got across a little bit more and covered his stumps, as Sunil Gavaskar says on air. Ajinkya Rahane joins Pujara. 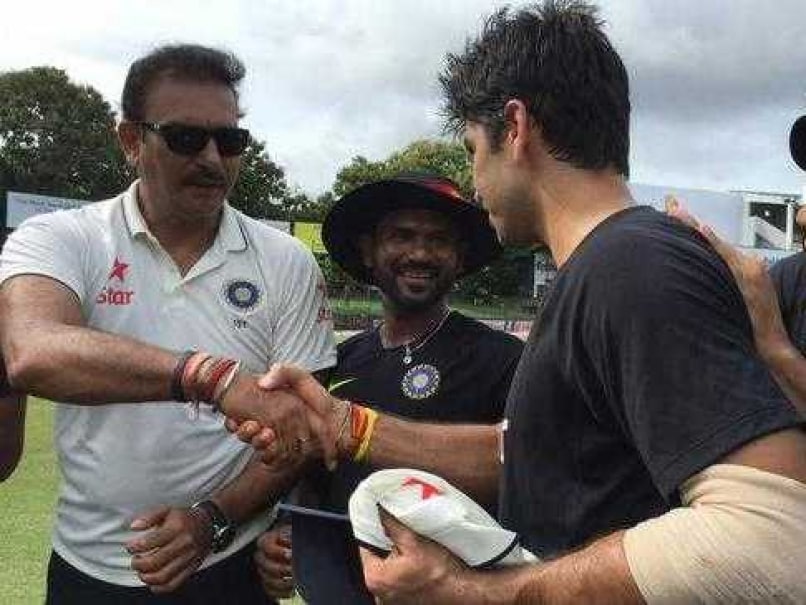 0934 hrs IST: TOSS! Sri Lanka have won the toss and they will bowl first. Cheteshwar Pujara replaces injured Murali Vijay in the playing XI while Naman Ojha makes his debut.

0915 hrs IST: Naman Ojha has been handed his Test cap, becoming 285th Test cricketer from India. He will replace Wriddhiman Saha in the playing XI. 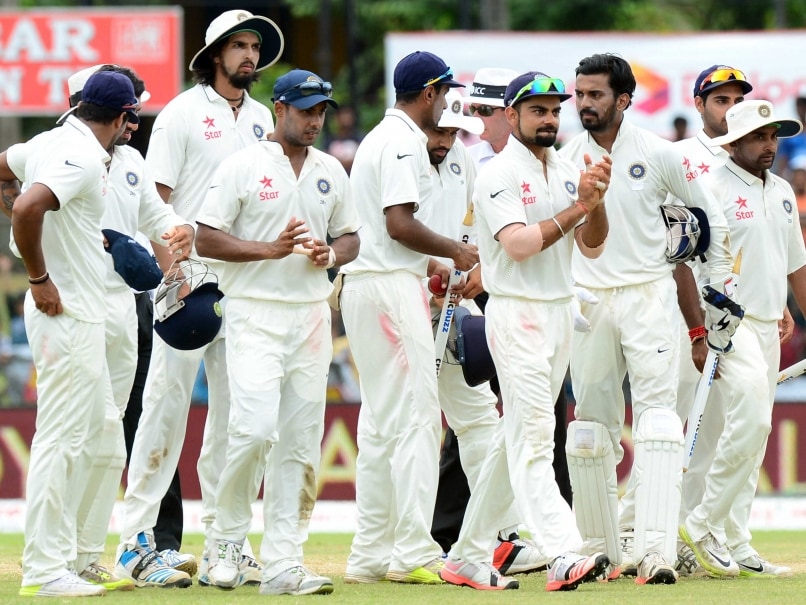 India's cricketers are high on confidence after their win in the second Test.

In the first Test at Galle, India had dominated proceedings for four days but it took a sensational spell from Rangana Herath to extend their woes overseas. Losing by 63 runs in a pursuit of 176 really hurt the Indians and there were questions whether this team had the ability to bounce back. (India, Sri Lanka Delay Playing XI Announcement Over Pitch Uncertainty)

Heading into the second Test, plenty of questions remained regarding India's bowling and batting. However, both stepped up to the plate and pulled off a fine victory for India.

Ravichandran Ashwin continues to be the star for India and his 17 wickets in two Tests have demonstrated his wonderful ability. On the other hand, the knocks by Ajinkya Rahane and Lokesh Rahul have demonstrated Indian cricket's coming off age. Rahane's adaptability and contributions overseas have been tremendous and Rahul has displayed ample courage to bounce back from failures. The efforts of Rahane, Ashwin and legspinner Amit Mishra helped India pull off a 278-run win and spoil Sri Lankan legend Kumar Sangakkara's farewell match.

In the days after the end of the match, the Sri Lankans are still pondering about the loss of Sangakkara. In June 2014, they had seen Mahela Jayawardene, another pillar of the Sri Lankan batting retire and one year later, they have seen Sangakkara head off into the sunset. The loss of 24214 runs in the middle order has left a massive gap and skipper Angelo Mathews has admitted that it will take big boots to fill the gap left by Sangakkara and Jayawardene.

In the pre-match press conference, Mathews, the most experienced of the Sri Lankan team with 51 Tests, stated, "After Sangakkara's retirement, the rest of us that are left have not played too many Tests. It will take a long time to fill the gap that he has left. But I think the team we have now can do that." (Sanga Irreplaceable: Jayasuriya)

Upul Tharanga, who has had an indifferent Test career so far, has been designated as the person who will fill Sangakkara's void. However, that is easier said than done. Nuwan Pradeep comes back into the team while Tharindu Kaushal, the bowler who has caused India plenty of problems in the first two Tests, has recovered from a hand injury and might feature in the Test.

For India, the only problem has been injuries. The absence of Murali Vijay and Wriddhiman Saha has opened the door for Naman Ojha to make his Test debut and has ensured a recall for Cheteshwar Pujara. This is the last-chance saloon for Pujara and he will look to capitalise on this opportunity by putting a solid performance at the top of the order. Rahane has shown his adaptability and he might stick to the No 3 spot for the time being. (In This India Team, No One Owns a Batting Position: Ravi Shastri)

Sunil Gavaskar has said that taking 20 wickets is crucial for India and he has urged the team management to play Bhuvneshwar Kumar. Whether the team makes any changes to the bowling unit following their success at the P Sara Oval remains to be seen.

There is however one small quagmire facing both the teams. The pitch at the SSC has confused the teams to such an extent that they have not announced their playing XIs. In fact, at first glance, the pitch, which was once the ultimate symbol of a smooth highway, now has a good grass covering with some moisture. The plan of action by both teams and the compositions will be heard eagerly once the coin has been tossed.

Virat Kohli will be desperate to break India's overseas woes and secure a series win in Sri Lanka after 22 years. For Sri Lanka, they will look to rebuild on a positive note after the end of the Sangakkara-era. It is a match with plenty at stake for both teams.