Virat Kohli registered his first series win as captain of the Test side when India defeated hosts Sri Lanka 2-1 recently. 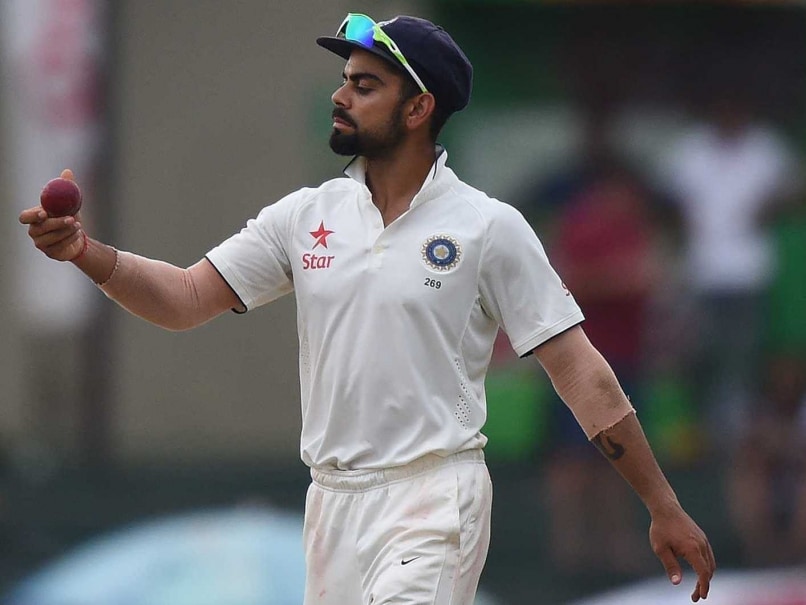 Virat Kohli during the third and final Test between Sri Lanka and India.© AFP

From whichever angle India's Test series victory in Sri Lanka is seen, a new name crops up as a game-changer, making it a truly collective effort of the team.

The series was gripping right through and the credit for much of the entertaining stuff must go to the Sri Lankan authorities for providing great pitches which gave both the teams enough to seize the opportunities.

The beauty of the contest was when both sides were in with a shout to win the last Test. If the Indians refused to get frustrated by the aggressive defiance of Angelo Mathews and debutant wicketkeeper-batsman Kusal Pereira, the Sri Lankans kept pace with the run rate for a final flourish post-tea. The Indians knew they had a trump in the second new ball while the Sri Lankans looked up to their captain to at least force a draw if not a sensational victory.

Naturally, in all this, the Indians see Virat Kohli as the man who delivered what he promised - or what he said would be his approach in his first full series as captain and overseas at that. (Also read: Is Virat Kohli responsible for Ishant Sharma's aggression?)

To execute his plan, Virat needed men who work on his wavelength. The contribution of everyone was a must if his five-bowler-plan had to work. No one had taken it more seriously than the bowlers, who contributed crucial runs in the lower order, enough to buy 60 wickets, which an Indian team has done only the second time in a three-Test card.

Yet, the figures show five mainline batsmen scoring hundreds in the six innings, none more precious than the one with which makeshift opener Cheteshwar Pujara carried his bat through in the first innings of the last Test. Come to think of it, his wait for a Test would have been much longer than eight months if regular openers Shikhar Dhawan and Murali Vijay had not been injured.

Likewise, Ajinkya Rahane's century in the second Test came in an unfamiliar one drop and not at No.5, where he got most of his runs, after the experiment with Rohit Sharma failed to come off as No.3 in the first Test.

The other two batsmen to score hundreds were Kohli and opener Lokesh Rahul, who also brought off a diving one-handed catch as makeshift wicketkeeper in the second innings of the second Test to dismiss Angelo Mathews, the lone batsman to score two hundreds in the series.

Rohit Sharma seemed to be the whipping boy of the experts. The young man disappointed many with his shot selection after getting in. His supporters might argue that his 202 runs in the series is second highest aggregate after his captain's 233 in six innings. But, it is no consolation getting an odd fifty to retain a place in the top order, more so when equally capable batsmen are sitting out.

The other Indian batsman to get a century is skipper Kohli in the first innings of the first Test. Dhawan's and his hundreds had gone waste at Galle, where the Indian let slip an opportunity to win by a couple of sloppy sessions in the field in Sri Lanka's second innings and, more so, another while chasing a reasonable target.

Now the Indians would be ruing the Galle mess-up as they had dominated the match, barring that blip in the last three sessions of play. Of course, if only the umpires had been a little alert or if there was DRS in operation, it would have been a 3-0 series washout for Sri Lanka.

The gut feeling of a captain may not necessarily come good always. Kohli thought Harbhajan's experience would be handy on the Sri Lankan pitches, not realising that they have undergone a sea change and the veteran off-spinner is no longer as potent as he was five-six years ago.

Kohli quickly brought in Stuart Binny to replace him as an all-rounder and the Bengalurian did fairly well to justify his selection, with his bowling in the second Test and batting at a critical juncture in the third.

Just to prove that there is no permanence about batting position, he made Binny bat ahead of debutant Naman Ojha and promoted Amit Mishra ahead after touting Ravichandran Ashwin as an all-rounder he is looking for. Mishra also earned the right with his dogged batting and in the last innings Ashwin proved his batting credentials with a timely and important fifty. Ojha looked competent as a wicketkeeper also, catching efficiently and also stumping one.

Kohli's handling of bowlers may not have inspired confidence in the purists who go by a set format of giving bowlers enough time to settle down to a line and length instead of bafflingly frequent changes. The Indian captain seems to go by his gut feeling rather than any conventional wisdom.

If he gives Ashwin the new ball, the next time he will bring in Mishra first, giving the impression as if he has forgotten Ashwin. He will have a healthy minor competition between Ishant Sharma and Umesh Yadav with Binny acting as a buffer.

Under the previous dispensation, a leg-spinner was seen as superfluous or redundant when an off-spinner and a left-armer were around. Some felt Mishra was shabbily treated. Now he has been reinistated to his rightful position and he has done exceedingly well to finish with 15 wickets behind man-of-the-series Ashwin's 21. He looked as confident while batting and twice he was unlucky to get out when going great guns.

If Ashwin has gone back to basics to reinvent his bowling, Ishant Sharma has found a new approach to rattle the batsmen. His aggression, not his antics for a senior cricketer in the side, has helped as Kohli acknowledged. Even to psyche himself, he could do by making the ball talk not by verbals. Getting disciplined far too often by ICC is not good for him and the side, even when provoked by the opposition.

Comments
Topics mentioned in this article
India Cricket Team Sri Lanka Cricket Team Virat Kohli Sri Lanka vs India 2015 Cricket
Get the latest updates on ICC T20 Worldcup 2022 and CWG 2022 check out the Schedule, Live Score and Medals Tally. Like us on Facebook or follow us on Twitter for more sports updates. You can also download the NDTV Cricket app for Android or iOS.