Ishant Sharma picked up two wickets while Umesh Yadav bagged one to reduce Sri Lanka to 67/3 after India set the hosts a formidable 386-run victory target. 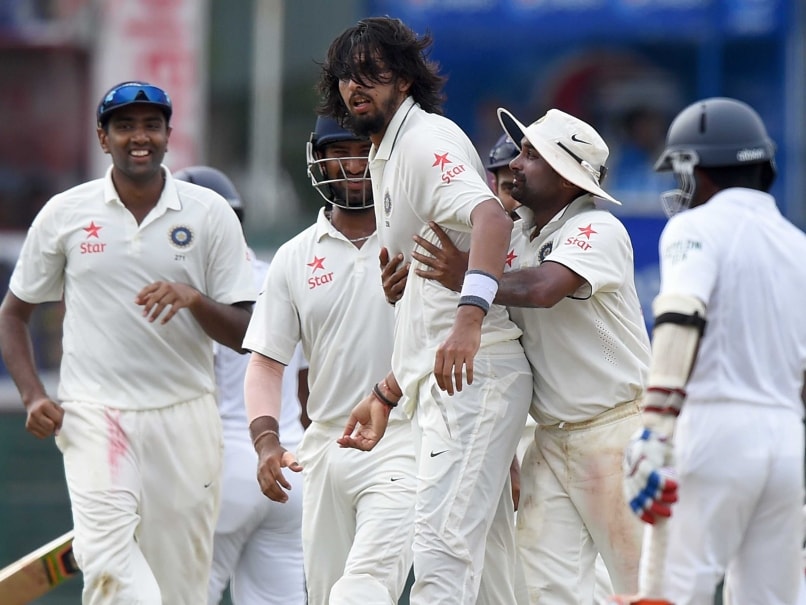 India stood seven wickets away from a series-clinching victory after setting Sri Lanka a formidable 386-run victory target on the penultimate day of the third and final Test on Monday. (Day 4 Blog | Scorecard)

Resuming on a precarious 21-3 in the bowler-dominated weather-hit contest, the visitors needed a string of cameos from their middle and lower-order batsmen to score 274 in their second innings.

In their first Test since batting great Kumar Sangakkara retired, Sri Lanka lost opener Upul Tharanga in the first over and were reeling at 67-3 at the close.

Opener Kaushal Silva (24) and skipper Angelo Mathews (22) were at the crease with the hosts still needing 319 runs for an improbable victory. (In Pics: When Gets Angry, Sri Lanka Suffer)

Having taken a 111-run first-innings lead, India consolidated their position in the first two sessions at the Sinhalese Sports Club to virtually bat Sri Lanka out of the contest.

Dhammika Prasad bowled with characteristic hostility but Nuwan Pradeep drew first blood, dismissing India captain Virat Kohli (21) who again succumbed to his penchant for pushing at deliveries outside the off-stump.

Stuart Binny (49) came up with a more eventful knock -- playing some risky shots, surviving a stumping opportunity, being hit on the helmet by Prasad and eventually falling agonisingly short of his second Test fifty.

Debutant Naman Ojha (35) and Amit Mishra (39) frustrated Sri Lanka while Ravichandran Ashwin (58) registered his fifth Test fifty before being the last man out.

Ishant, who had an animated altercation with Prasad earlier in the day, also dismissed Dinesh Chandimal before giving the batsman a send-off, an act that earned him a 65 percent match fee fine in the first Test.

Comments
Topics mentioned in this article
Ishant Sharma Rohit Sharma Ravichandran Ashwin Dhammika Prasad India Cricket Team Sri Lanka Cricket Team Sri Lanka vs India 2015 Cricket
Get the latest updates on ICC T20 Worldcup 2022 and CWG 2022 check out the Schedule, Live Score and Medals Tally. Like us on Facebook or follow us on Twitter for more sports updates. You can also download the NDTV Cricket app for Android or iOS.