In fact, it was Kohli idea to do the Bhangra, as can be seen in the viral video. Zoravar, however, interrupted daddy Dhawan's and Virat's performance. 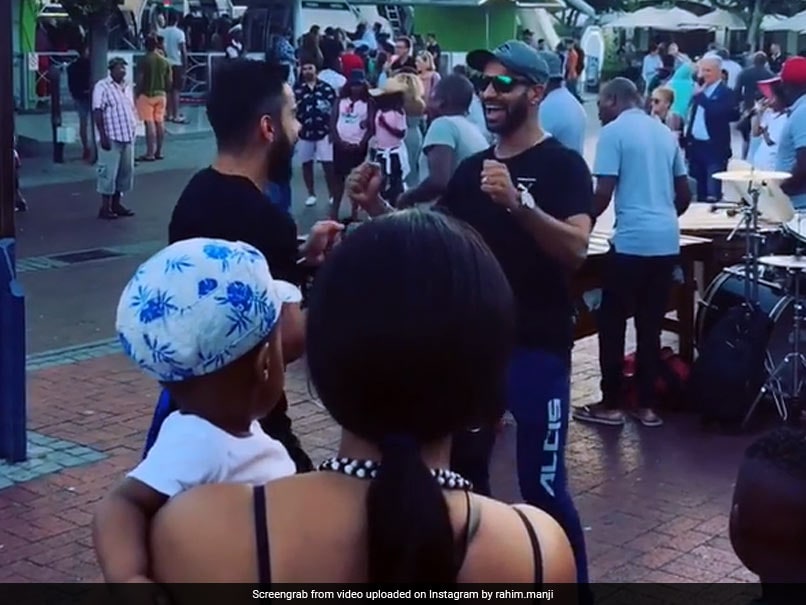 Virat Kohli and Shikhar Dhawan showed off their dance moves on the street.© Instagram

Virat Kohli and Shikhar Dhawan broke into a spontaneous gig at the V&A Waterfront in Cape Town after they spotted a street brand dishing out some local music. After grooving to the beats of the music for a bit, Kohli and Dhawan donned their desi avatar with some Bhangra moves. In fact, it was Kohli's idea to do the Bhangra, as can be seen in the viral video. Zoravar, however, interrupted daddy Dhawan and dragged him away.

The touring Indian team on Sunday was forced to practice indoors due to rain ahead of the first Test starting January 5 at the Newlands Cricket Ground in Cape Town. The official Instagram account of Indian Cricket Team uploaded a picture showing players training indoors in Newlands. "And we've moved indoors for the training session #TeamIndia," Indian Cricket Team's Instagram post read.

And we've moved indoors for the training session #TeamIndia

India play three Tests, six One-Day Internationals and three Twenty20 International matches on their two-month tour with the series called a litmus test for both for Kohli as captain and the team in general.

With a great mix of solid batsmen and good fast bowlers, this tour is being viewed as a golden chance for India to get one over hosts South Africa.

Comments
Topics mentioned in this article
India Cricket Team Shikhar Dhawan Virat Kohli South Africa vs India 2018 Cricket
Get the latest updates on ICC T20 Worldcup 2022 and CWG 2022 check out the Schedule, Live Score and Medals Tally. Like us on Facebook or follow us on Twitter for more sports updates. You can also download the NDTV Cricket app for Android or iOS.