Virat Kohli has scored 18 hundreds in successful run chases at an incredible average of 94.04. 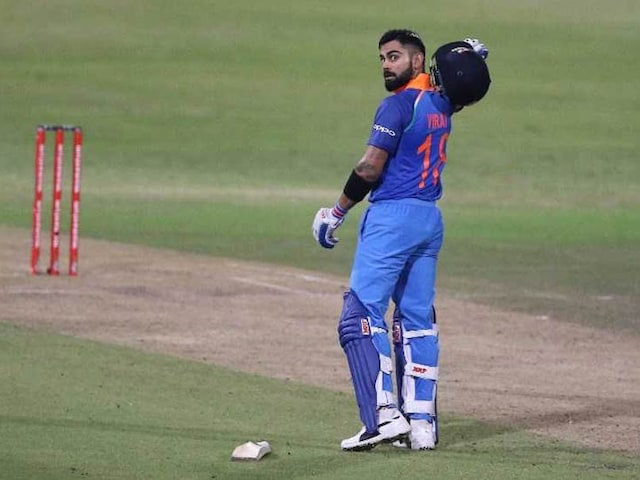 Virat Kohli was at it again as he notched up his 33rd ODI hundred to guide India to a comprehensive 6-wicket win over South Africa in the 1st ODI at Kingsmead, Durban. Chasing 270 to win, Kohli and Ajinkya Rahane (79) put on 189 runs for the third wicket as India got to the target with 27 balls remaining. Courtesy his match winning ton in Durban, Kohli has now scored hundreds in every country he has played in. Following the win, Twitter was full of congratulatory messages for the Indian skipper but it was Michael Vaughan, former England captain, who paid Kohli the ultimate compliment.

"He is at is again .. The Greatest chaser the game has ever seen .. #Fact #SAvIND @imVkohli," Vaughan posted on his official Twitter handle.

He is at is again .. The Greatest chaser the game has ever seen .. #Fact #SAvIND @imVkohli

Not just the former England opener, other former cricketers like VVS Laxman and Mohammad Kaif were also quick to acknowledge Kohli's genius with the bat.

What a chaser, what an incredible player- Virat Kohli. A hundred in every country he has played. This one has made what looked a tricky chase look like a cakewalk.#INDvSA pic.twitter.com/E9GuAVFq1Y

100 Number 33 for the Modern Master. King of chases Worldwide @imVkohli . India have cruised along #IndvSA

Fabulous start to the series!! An all round effort in securing a big win. Another great century by the run machine, @imVkohli and a superb innings played by Ajju @ajinkyarahane88. Keep it up boys!@BCCI #INDvSA pic.twitter.com/uudgYEtl6k

Congratulations #TeamIndia!! Setting the performance mark just higher & higher with every match! This is why I love cricket! Also, @imVkohli you have been killing it!! It's been an amazing season so far, well played #TeamIndia !! #IndvSA pic.twitter.com/ZV9vbzzI7j

The momentum that #TeamIndia was looking for, started from the 3rd test. Now it's the time to dominate. It's easier said than done. But the attitude is outstanding. Well done guys... @ajinkyarahane88, ruthless @imVkohli, @yuzi_chahal & @imkuldeep18 #Inspirational #INDvSA #1stODI pic.twitter.com/7WMtiVgNXY

The praise for Kohli is not unfounded. The Indian run-machine averages 56.09 in ODIs with 33 centuries and 45 half-centuries to his name, however, the Indian captain has scored 18 hundreds in successful run chases at an incredible average of 94.04.

Barring Pakistan where he is yet to play, Kohli has hit centuries in all the nine countries he has played in. Not just that India's successful run chase also brought about an end to South Africa's 17-match winning streak at home.

The second ODI will be played at the SuperSport Park in Centurion on Sunday and Indian fans will be hoping from another batting masterclass from 'King Kohli'.

Comments
Topics mentioned in this article
India Cricket Team South Africa Cricket Team Virat Kohli Michael Vaughan South Africa vs India 2018 Cricket
Get the latest updates on IPL 2020, check out the IPL Schedule for 2020 and Indian Premier League (IPL) Cricket live score . Like us on Facebook or follow us on Twitter for more sports updates. You can also download the NDTV Cricket app for Android or iOS.