Virat Kohli scored an unbeaten 160 as India once outclassed South Africa in the third ODI. 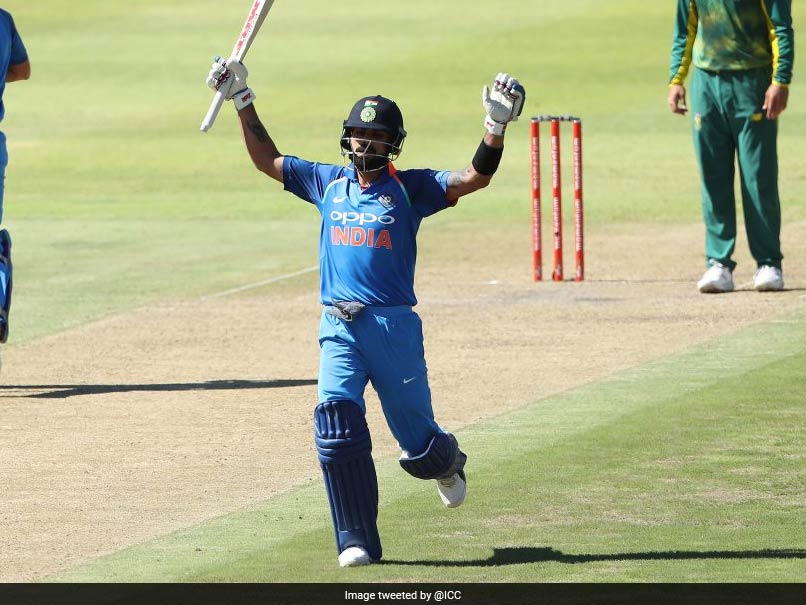 Virat Kohli became the Indian ODI captain with most hundreds to his name.© AFP

Virat Kohli produced yet another batting masterclass to score his 34th ODI century and second of the ongoing series against South Africa. His unbeaten 160 off 159 balls is the highest individual score by an Indian batsman against South Africa in South Africa, going past Sourav Ganguly's 127 at Johannesburg in 2001. The Indian skipper's second highest ODI score helped India completely blow away the hosts in the third ODI as the visitors took an unassailable 3-0 lead in the six-match series. Following Kohli's impressive performance, Twitter was full of congratulatory messages from past and current cricket superstars and among them was Kohli's contemporary and another run machine -- David Warner.

Warner, took to Twitter, and lauded Kohli, saying, "He's on a different level this bloke wow. What a player."

He's on a different level this bloke wow. What a player @imVkohli https://t.co/SoDyRQajQi

@imVkohli is just a different level. Another #class

Sachin Tendulkar also had words of praise for Kohli and he was joined by other current and former Indian cricketers.

Stepping out on the field and scoring centuries has become a regularity for @imVkohli. Congratulations on your 34th ODI ton! Keep the runs flowing always. #INDvsSA pic.twitter.com/4eyuMUpl12

India's run machine has done it again! 34th ODI 100. What a player!@ImVKohli May this form of yours go on and on! SAvsIND

No words to describe Virat Kohli 's consistency. Other good batsman look really ordinary once you watch him bat. What a joy to watch him score hundreds for fun. 34 of them now and this , one of his best #INDvSA

Well played @imVkohli One of the best ODI 100's I have seen. Played with a lot of maturity and responsibility especially when the team was under pressure.

Getting inspired by every innings! Top Knock @imVkohli !! Always leading from the front #INDvsSA

Another masterclass from the modern-day master. What a knock @imVkohli. Amazes me every time I watch him bat. #SAvIND

What an outstanding knock buddy @imVkohli !! It was a treat to watch you play today#respect #INDvsSA #TeamIndia

Records kept tumbling as his innings progressed. He also became the Indian ODI captain with most hundreds to his name.

He went past Ganguly again, who has 11 centuries in 142 innings. Kohli now boasts of 12 hundreds as skipper but in only 43 innings.

Kohli, with 318 runs in this series so far, now also has the most runs for a visiting batsman in a bilateral ODI series against South Africa in South Africa. Ricky Ponting, with 283 runs in 2001-02, was the previous best.

Comments
Topics mentioned in this article
India Cricket Team South Africa Cricket Team Virat Kohli David Warner South Africa vs India 2018 Cricket
Get the latest updates on IPL 2021, IPL Points Table , IPL Schedule 2021 , live score . Like us on Facebook or follow us on Twitter for more sports updates. You can also download the NDTV Cricket app for Android or iOS.