The hosts won the second Test by 135 runs on day five and took an unassailable 2-0 lead in the three-match series. 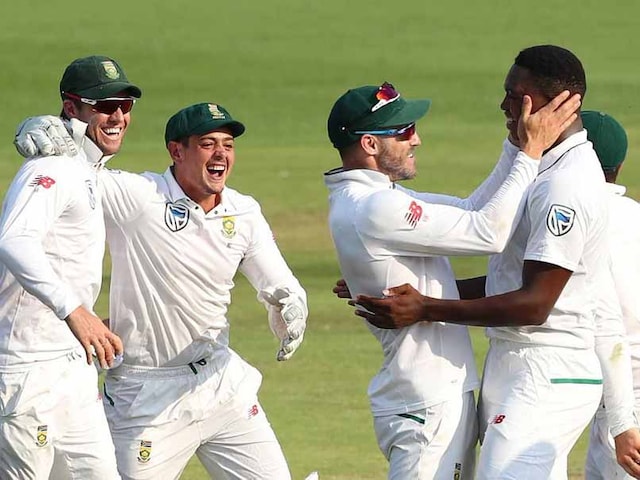 South African skipper Faf du Plessis has revealed that the 2015 series loss in India on raging turners motivated their team to win the series in Centurion, on a pitch that "should have suited the visitors more". The hosts won the second Test by 135 runs on day five and took an unassailable 2-0 lead in the three-match series. "It was tough for us in India (in 2015). Personally and as a team, we struggled there, and mentally it took a toll on us, even after that series. So the guys were extremely motivated for this series to put that right," said du Plessis in the post-match press conference. "I think you could see that in this Test especially. In conditions that should suit them more than us, we adapted really well and we fought every hour to get ahead in the game. It is very pleasing sitting here 2-0 up," said du Plessis on Wednesday.

"The previous game we spoke about how Newlands was almost fast forward mode, so it was an exciting game and this was completely the opposite. It needed a lot of grinding, a lot of hard work and a lot of pushing ourselves for longer and longer and that for me makes this Test match incredibly special. "The previous one was more of a sense of excitement and the best one to watch but I take a lot of pleasure out of winning games like this, where the team needs a lot of heart and a lot of character and a lot of fight to make sure we get across the line.

The Proteas' skipper expressed concern about the pitch and compared it to the raging turners in the 2015 series. "I was very concerned when I got here, leading up to the Test match. It looked not like a Centurion wicket that I know. That is a concern, to be honest. I believe this was an opportunity that we missed. We can blame the groundsman but we also have to blame ourselves. "We made a process where we make sure Cricket South Africa has someone that looks after the groundsman to get the right kind of pitches when we play against teams. That's something I will be taking up and making sure we can improve," du Plessis said.

"Our win-rate away from home is the best in the world so we have played some really good cricket. The last time we went to India we didn't play as well, but I do feel the conditions were touching on extreme. "For me the way to look at that is even the Indian batting line-up struggled in conditions where their spinners were much better than ours. Every Test match lasted three days.

"In this series there have been times when it has looked tough, but there have been guys scoring runs and guys taking wickets, so there is always that battle between bat and ball. If you have that, for me it is a good wicket. "If it is just dominated by seam or spin bowling then I think the wickets are excessive. We learnt a lot of lessonsfrom that tour, and I expect that when we go there again, we'll put up a better fight," he added. India were bowled out for 151 runs in their 287-run chase with debutant Lungi Ngidi picking up 6-39 and became only the seventh Proteas' pacer to pick a five-wicket haul in his maiden Test.

"It speaks volumes for his maturity. When new guys come into the team, from my side it's important to make sure they feel like they belong, but then for them to perform means they have good heads on their shoulders and don't see the occasion as too big.

"They just see it as another game where they can perform. When I looked at Lungi I never sensed any nerves. He was really calm and just wanted to bowl. His control impressed me a lot, which is a good sign for his Test career going forward," said the skipper.

The Indian bowlers had done well on this pitch in restricting South Africa to 335 and 258. Faf praised AB de Villiers for his 80 runs in the second innings, while also talking about Virat Kohli's 153 who was the only Indian batsman to cross 50 in this match. "The runs he scored in this Test were important but I want to focus on the partnerships. Yes, AB looks like the superstar from an Indian perspective.

"But guys like Dean Elgar on this wicket, for me, the rest of the team needs to understand there is another role to play, which is to fight and grind for as long as possible because the longer you grind the weaker the opposition gets. "We saw yesterday that we took India so far beyond that point that they just collapsed this morning because the runs were too much.

"Obviously AB is a special player and we're very privileged to have him in our team because he has the ability to counterattack. Virat Kohli is similar. They put bowlers under pressure," he said.South Africa now have the opportunity to white-wash the world's no.1 Test team 3-0. The third Test begins at the Wanderers in Johannesburg on January 24.

"Big time! It was the same when we were playing Australia and we were 4-0 up. It's an amazing opportunity - not a lot of South African teams have had it. It makes us even hungrier to go out there as a team, so we're really looking forward to the next Test. "We haven't had the opportunity to beat India 3-0 for a while," du Plessis signed off.