Highlights, India vs South Africa, 2nd Test: South Africa reached 90/2 in their second innings after bowling out India for 307 in their first innings on the third day of the second cricket Test at the SuperSport Park here on Monday. 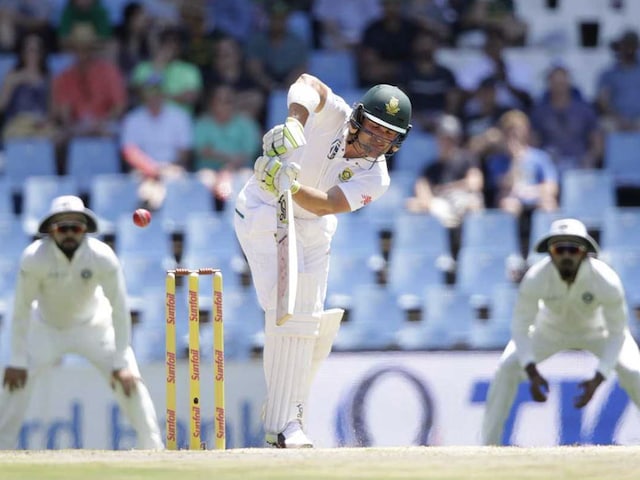 South Africa reached 90/2 in their second innings after bowling out India for 307 in their first innings on the third day of the second cricket Test at the SuperSport Park here on Monday. South Africa have a lead of 118 runs with AB de Villiers (50) and Dean Elgar (36) at the crease as bad light and rain disrupted majority of the post-tea session. Jasprit Bumrah struck twice at the start of South Africa's second innings after Indian captain Virat Kohli hit a magnificent century on the third day. Kohli made 153 in India's first innings of 307 before he was last man out, caught in the deep off Morne Morkel, who took four for 60. Despite Kohli's efforts, South Africa had a first-innings lead of 28. This was soon rendered insignificant when Bumrah reduced South Africa to three for two. Aiden Markram was Bumrah's first victim, falling leg before wicket as he played back to a ball which cut back and kept low. Bumrah followed up with the wicket of Hashim Amla, who was also trapped on the back foot by a ball which cut back. Both batsmen were so palpably in front of their stumps that neither sought a review.

India had opened the bowling with off-spinner Ravichandran Ashwin and he troubled left-handed opening batsman Dean Elgar. But Elgar survived to share an unbroken 57-run partnership with AB de Villiers, who batted confidently to be on 33 not out. Kohli was largely untroubled as he scored his runs off 217 balls with 15 fours. But there was only one substantial partnership after India resumed on 183 for five. Kohli and Ashwin (38) put on 71 for the seventh wicket before the second new ball hastened the end of the innings.

21:00 IST: The umpires are making their way out to the middle. No official word yet.

20:50 IST: It is not drizzling but the light has not improved either.

20:45 IST: Meanwhile more covers are coming on. Don't think there will be any more action today unless the weather improves drastically.

And now they are off for light. Play has been stopped here after 29 overs of the SA innings #SAvIND #FreedomSeries pic.twitter.com/wDyf160BVg

20:12 IST: A loud caught behind appeal from Parthiv Patel. Bumrah says no edge.

19:55 IST: FOUR! Dean Elgar gets a thick edge and the ball races towards third man. Short ball from Bumrah and the ball travels between the keeper and first slip. It could have been an easy catch.

19:51 IST: Dean Elgar and AB de Villiers are making their way to the middle.

19:47 IST: Floodlights are on at SuperSport Park.

Good news. The rain has stopped and play is set to resume in 5 minutes #SAvIND pic.twitter.com/aZUpyKVbWD

Update - Play to resume at 16:20 local time if there is no more rain. No overs lost and play to go on until half past six - light permitting #SAvIND pic.twitter.com/mSodYev5mz

19:37 IST: The umpires are out for an inspection at SuperSport Park.

19:34 IST: The stumps are being erected. It's time for some more cricket.

19:30 IST: The groundsmen are slowly getting the covers off.

It's starting to clear up a bit..The groundsmen are slowly getting the covers off. A call on the day's proceedings will be taken after further inspection #SAvIND pic.twitter.com/qFtprlFOro

19:18 IST: The situation right now at SuperSport Park in Centurion.

The situation right now at Supersport Park. The covers are still on but the heavy downpour has settled into a light drizzle. #SAvIND pic.twitter.com/ZpLVfaeBqB

Here come the covers as lightening and rain stops play. SA are 68/2 at this stage and lead by 96. De Villiers 35*, Elgar 29* #ProteaFire #SAvsIND #SunfoilTest pic.twitter.com/NXTDztqgul

18:43 IST: A loud lbw appeal from Ashwin and Parthiv Patel. Not out - says umpire.

18:41 IST: The partnership between AB de Villiers and Dean Elgar is now 95 runs.

18:35 IST: SIX! Dean Elgar launches Ashwin towards long on for a huge one. what a shot from him.

18:30 IST: Welcome back! The third and final session gets underway.

That's Tea on Day 3 of the second Test and SA are 60/2 and lead by 88 runs. It was @Jaspritbumrah93 who took both the wickets. More details here: https://t.co/BsnwXUTXv4 pic.twitter.com/RusnwASR5w

17:55 IST: De Villiers sends Ishant Sharma towards long on for a boundary.

17:46 IST: FOUR! Beautiful shot from De Villiers. He goes on backfoot and drives the ball through covers.

17:39 IST: Ishant Sharma is brought into the attack by the Indian skipper Virat Kohli. He bowled well in the first innings and will hope to replicate the same. AB de Villiers sends one to the square of the wicket. The ball races to wards the boundary. Barring the four, Ishant has been decent in his first over. South Africa 32/2

17:35 IST: A loud caught behind appeal from Kohli and Bumrah. Umpire says NO. Kohli asks Parthiv and the wicket-keeper says no edge. India are not going for a review.

Important innings played by @imVkohli. If we bowl well, we have a chance to do something special. Come on guys!! #SAvIND

In Virat Kohli 's first 11 test hundred's, 2 scores of 150 + ,next 10 hundred's, all converted to 150 + .The thing about big players, when they score, they make it count.
Important now for the bowlers to bowl with discipline. #SAvIND

17:25 IST: A loud caught behind appeal from Parthiv Patel and Jasprit Bumrah. Umpire says NO. Brilliant bowling from the India pacer.

Wicket! Wow, this is an exceptional start by India and in particular Bumrah. Another one that keeps low and Amla has to go for 1. SA are 3/2 and lead by 31 #SAvIND #SunfoilTest pic.twitter.com/bM1HBxZ7cJ

17:05 IST: Ashwin from round the wicket. A forward short leg, slip and a short extra cover in place.

16:55 IST: India players are out in the middle. Dean Elgar and Aiden Markram are set for South Africa's second innings. Ashwin to start the proceedings.

16:38 IST: Jasprit Bumrah is the new batsman at the crease.

The Run Machine continues as he brings up his 150 runs off 207 balls #SAvIND #FreedomSeries pic.twitter.com/imD6l5h9Qt

16:15 IST: Virat Kohli sends Morkel towards long on. Excellent running between the wickets from the skipper and Ishant Sharma. Two runs for Kohli. India 292/8, trail by 43 runs.

16:12 IST: Hello and welcome back! Second session gets underway at SuperSport Park.

15:25 IST: FOUR! Virat Kohli comes a bit forward and sends Philander towards covers for a boundary. India 285/8, trail by 50 runs.

15:17 IST: Mohammed Shami is the new batsman at the crease.

15:13 IST: Virat Kohli sends Philander towards fine leg this time. He will get 3 runs. Excellent running between the wickets from Kohli and Ashwin.

15:12 IST: FOUR! Vernon Philander is back into the attack. Kohli welcomes the pacer with a superb cover drive. Excellent stuff from the Indian skipper. India 277/6, trail by 58 runs.

15:10 IST: A loud LBW appeal from Keshav Maharaj. Umpire says NO. Captain Faf du Plessis speaks to the spinner and decides not to take the review.

15:08 IST: FOUR! Ashwin lofts Maharaj over mid off region for a boundary.

15:06 IST: Virat Kohli drives Lungi towards long on but will get only two runs.

14:45 IST: FOUR! Virat Kohli stays back and cuts the ball beautifully towards backward point for a boundary. India 244/6, trail by 91 runs.

14:40 IST: Centuries by an Indian captain in South Africa

The first break of the morning in the Centurion heat. India are up to 235/6 after starting the morning on 183/5. Kohli is up to 105* #SAvIND #FreedomSeries #SunfoilTest pic.twitter.com/D3DtM5Khk7

14:27 IST: AB de Villiers takes Ashwin's catch but the South African is not sure. Umpire has gone upstairs for a review. And, the replay shows it is NOT OUT. Ashwin is safe.

Appeal from Rabada and De Villiers for a catch to dismiss Ashwin. But replays are inconclusive and the batsman survives on 23. India are 233/6 #SAvIND #FreedomSeries pic.twitter.com/UqhBk5oLX1

14:18 IST: FOUR! Another one from Ashwin. It looks like replay of the previous two boundaries. He has hit all three boundaries towards square of the wicket region. Wonderful batting display from him. India 231/6, trail by 104 runs.

14:17 IST: FOUR! Back to back boundaries for Ashwin. Kohli is seen appreciating the spinner from the other end.

14:06 IST: Rabada hits Ashwin on his left hand. The physio is out. Ashwin is ready to go again.

14:04 IST: Ravichandran Ashwin is the new batsman at the crease.

14:00 IST: What an innings from the Indian skipper.

13:55 IST: Virat Kohli brings up his 21st Test century. This is his second century against South Africa in South Africa.

Leading from the front #TeamIndia Skipper @imVkohli as brings up his 21st Test #FreedomSeries #SAvIND pic.twitter.com/INgkFgzytF

13:46 IST: FOUR! Virat Kohli moves to 90 with a boundary off Lungi towards third man.

13:35 IST: From one spinner to another. Jadeja was seen bowling to Ashwin in the morning.

From one spinner to another. @imjadeja helping out his spin mate @ashwinravi99 gear up for Day 3 #TeamIndia #SAvIND pic.twitter.com/YM3SRw4tHN

13:31 IST: Virat Kohli and Hardik Pandya are making their way to the middle. Vernon Philander is ready with the ball. Here we go...

13:29 IST: Virat Kohli is on the verge of his 21st Test century. This will his second century against South Africa in South Africa.

13:24 IST: Indian skipper Virat Kohli (85 batting) waged a lone battle to lift the struggling visitors to 183 for five in their first innings on the second day. The flamboyant Delhi right-hander hit eight fours in his unbeaten 16th half-century in Test cricket after India bowled out the hosts for 335 in their first innings in the morning session. Kohli and Hardik Pandya (11 batting) were at the crease as the umpires called for the end of day's play with India still 152 runs in arrear.

13:00 IST: Hello and welcome to the Live coverage from Day 3 of the second Test in Cape Town.

Earlier, South African captain Faf du Plessis made 63 before the hosts were bowled out for 335.

Du Plessis battled for 217 minutes and faced 142 balls before he was ninth man out, bowled when he went for a big hit against Ishant Sharma.

South Africa added 66 runs to their overnight 269 for six.

Sharma took two of the four wickets that fell, finishing with three for 46, while off-spinner Ravichandran Ashwin took four for 113.

India dropped three catches, all off Ashwin. Kagiso Rabada, who made 11, was dropped by a diving Kohli at slip when he had one, with the batsman taking two runs.

He was then put down at point off the next ball when Hardik Pandya was obstructed by fellow fieldsman Mohammed Shami.

Du Plessis was dropped by wicketkeeper Patel off Ashwin when he had 54.