India vs South Africa: Feels Like We Are Bowling In India, Says Morne Morkel On Centurion Pitch

Morne Morkel was the pick of the bowlers for South Africa in the first innings as he returned with figures of 4 for 60 that helped South Africa bowl out India for 307. 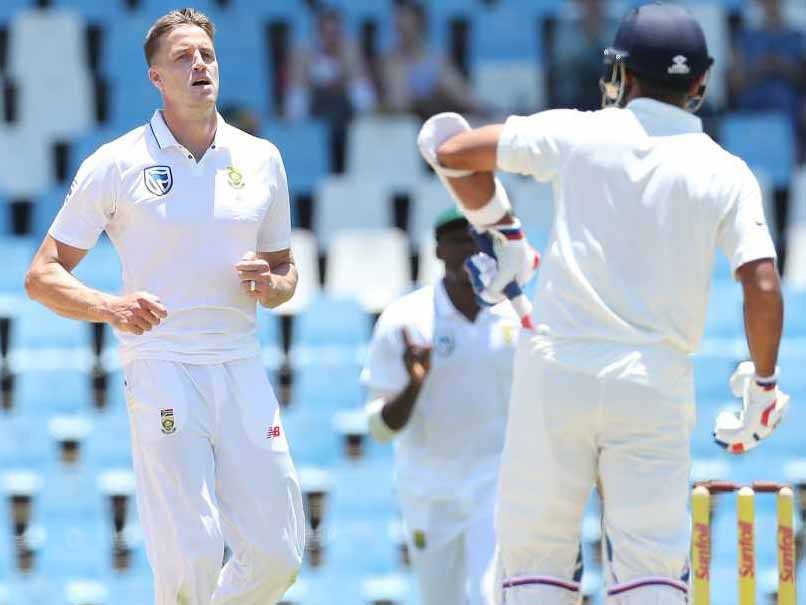 Morne Morkel was not happy with the Centurion track that had little help for the bowlers.© BCCI

South African seamer Morne Morkel on Monday lashed out at the Centurion track which was unusually slow in nature and compared it with pitches in India. Morkel was the pick of the bowlers for South Africa in the first innings as he returned with figures of 4 for 60 that helped South Africa bowl out India for 307, giving the Proteas a lead of 28 runs. The hosts finished at 90/2, leading overall by 118. Speaking about the Centurion track, Morkel said that he has grown up playing all his cricket at the ground but never came across a wicket like this before, terming it as hard work for the bowlers and went on to add that it was right up there with one of the hardest spells he has bowled.

"I've played cricket here all my life, and I've never seen a wicket like this at the SuperSport Park. It was really hard work. In the heat, with conditions really tough, it was right up there with one of the hardest spells I've bowled," said Morkel after day three of the second Test.

"I think the pace of the wicket was the toughest aspect. You've got a small little window with the new ball. The reason might be because it's under covers overnight, but in the first hour the balls seems a little bit quicker off the deck.

"But after that, there's actually been no pace in the wicket. It's important to come out with different sorts of game plans. You need to try a lot of things but we had runs on the board in the first innings to try different things. From a bowling point of view, it is definitely not the ideal sort of surface," he added.

When asked if he would compare it with an Indian wicket, the pacer replied, "One hundred percent, yes. It's unheard of that a spinner bowls that amount of overs on the first day. We even took the option to open in the over before lunch with a spinner (yesterday).

"There's a very sub-continental feel to it. It is tough to score, and tough to get people out. Luckily we've got some experience of that in the bank. But they are not the conditions that we want here in South Africa."

Talking about the day's play, cut short by rain and bad light, Morkel said that a result was very much possible despite the nature of the pitch.

"Obviously, it was important for us to get the breakthrough this morning. We knew, talking last night, if we took two wickets we would be bowling to their tail-enders. So to get those first two - Pandya or Virat or Ashwin - was crucial.

"Luckily by a run out, things changed a little bit. Otherwise I think it would have been an interesting sort of day. And then with the bat this afternoon, I thought Dean (Elgar) and AB played superbly after losing those two early wickets.

"It was tough, with Ashwin bowling from one end and they had the luxury of rotating their seamers from the top. But the way they stuck out, to have the lead by over 100 tonight is satisfying," said Morkel.

Morkel said the game will have an outcome despite the loss of time today due to rain and bad light.

"I think definitely a result is very much possible. If they get some early wickets tomorrow, or if we can bat through the first session while not losing many wickets, the game will still be very open.

"Off the top of my head, I think maybe 250 on Day 5 will be a safe target. With the wicket now turning a little bit and keeping a little bit low, I think 250 can be a very good score," he added.

Virat Kohli scored a handsome 153 runs to anchor the Indian innings. Later, Jasprit Bumrah reduced the hosts to 3/2 before they recovered thanks to AB de Villiers' half-century.

"Virat is very competitive. They are over here to compete and they've got a team that could potentially beat South Africa for the first time here. That's his nature.

"It gets him going and keeps him going. We're well aware of that but we don't take any notice of it. And if you get a batsman of his quality, you've got time to adjust.

"Bowling certain lengths, certain lines, we've got that small window to make a play. To keep him quiet on this sort of surface, we have to bowl as many dot balls as possible," Morkel said.

On Jasprit Bumrah, Morkel added: "Bumrah has got the perfect action for this sort of wicket. He is very skiddy. Talking to our batters and doing some preparation before the Test match, we've got our game plans.

"Talking about collapses (in the second innings) is a bit of a red flag but it's something that we do talk about -losing a cluster of wickets is not ideal.

"Individuals must take responsibility, but there's a massive thing in the team to build partnerships. Hopefully tomorrow (Tuesday) we can get that lead that we want," he signed off.

Comments
Topics mentioned in this article
India Cricket Team South Africa Cricket Team Morne Morkel SuperSport Park, Centurion South Africa vs India 2018 Cricket
Get the latest updates on IPL 2021, check out the IPL 2021 Schedule and Indian Premier League Live Score . Like us on Facebook or follow us on Twitter for more sports updates. You can also download the NDTV Cricket app for Android or iOS.