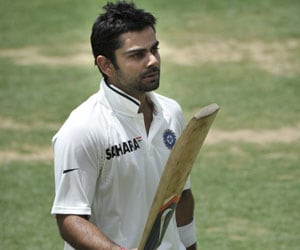 Former South African coach Ray Jennings, who is also the coach of the Indian Premier League franchise Royal Challengers Bangalore, spoke about Virat Kohli's weakness against fast bowling ahead of the two-match Test series between India and South Africa, starting December 18 in Johannesburg.

"It's going to be quite a difficult test for him. South Africa in South African conditions will try to exploit his weaknesses. When you look at Virat Kohli as a batsman, he's a superb player of spin. If there is any weakness, it's while facing fast bowling. He will definitely be tested in South Africa, like he has been during the ODIs. He has to rise above that challenge in these conditions. It's a pity that it's only two Test matches because if he does well, people will say it's only two Tests. If he does badly, they'll say he failed in only two Tests. That is, unfortunately, the issue," Ray Jennings was quoted saying by ESPNCricinfo. (India need to get out of mental block: Gibbs)

Kohli's appetite for big runs and reputation as a big match player have been consolidated over the last couple of years. Yet, he suffered poor form in the two ODIs against South Africa, scoring only 31 runs. However, Jennings, who has seen Kohli grow from strength to strength in the last five years, was also quick to suggest that Kohli was good enough to face challenges of any kind. (We have the winning desire: Pujara)

"I know Virat is a very moody and confident type of player. So the most important thing for him right now is to get his mind into that confident state. To make sure he feels good about himself," Jennings said.

"In South Africa, the wickets are quicker. You are playing on our soil, where the ball swings differently, swings quicker and moves off the wicket quicker," he added.

Comments
Topics mentioned in this article
Cricket Virat Kohli Raymond Vernon Jennings India Cricket Team South Africa Cricket Team South Africa vs India 2013-14
Get the latest Cricket news, check out the India cricket schedule, Cricket live score . Like us on Facebook or follow us on Twitter for more sports updates. You can also download the NDTV Cricket app for Android or iOS.