Former India batsman Sunil Gavaskar says the culture of gaining first innings lead in domestic cricket does not encourage Indian sides to go for outright wins after batting well in the first innings. 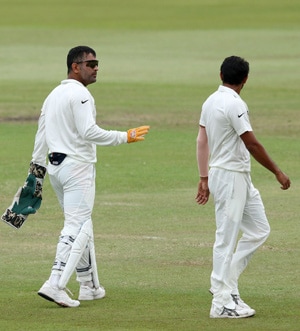 Even though skipper Mahendra Singh Dhoni feels that India's Test series in South Africa was fantastic, cricket pundits feel the team should have done better than a 1-0 loss in the Rainbow Nation. Former batting great Sunil Gavaskar is of the view that India failed to launch a killer blow against South Africa in the two Tests. (Read: I would've strangled South African groundsmen for being too kind to India, says Geoffrey Boycott)

"India's cricketers returned after a disappointing tour of South Africa where a couple of bad sessions cost them the Test series. They had done exceptionally well to be in a winning position in the first Test, but even while accepting that the pitch had slowed down and become easier for batting, it looked that the Indians did not know how to land the knockout punch," he wrote in his column in the Times of India.

Gavaskar, meanwhile, says one of the factors that could have led to the team's failure to land the knockout blow was the culture of banking on a first innings lead in India's domestic circuit. In a total of 108 group matchesÂ  this Ranji season almost half the number of games (51) have been decided on the basis of a first innings lead.

"This is mainly due to the culture in Indian cricket where the first innings lead is good enough to take the team forward. This culture does not encourage teams to look for outright wins, and, as everybody knows, winning is a habit, just likes scoring centuries and converting them into double tons," he wrote.

"Many times we have seen, especially in the Duleep Trophy tournament where teams take a massive lead, yet not only do not enforce the follow on, but bat for another couple of days and don't try for an outright win. So when a winning opportunity presents itself overseas, the players are just not used to going for the kill."

During the three-week break from international cricket, the spotlight now falls on the knockout phases of the Ranji Trophy starting next week. Gavaskar is pleasantly surprised to see teams like Maharashtra and Jammu and Kashmir in the quarters, while Delhi and Tamil Nadu failed to qualify. "There have been some pleasant surprises in those teams qualifying for the Ranji knockouts, and hopefully they will be able to spring some more shocks on the field," the 64-year-old added.

Gavaskar also hopes that few Ranji players who represent India are allowed to leave a day later than January 12, the departure date for New Zealand tour, that starts on January 19 with the first ODI at Napier.

"The Indian team leaves for New Zealand on the 12th, and hopefully the powers that be will allow those whose teams are in the quarterfinals to leave a day later. Having the best players available raises the standard of the event and gives a more realistic view of the talent when they play against the best in the country. The first one-dayer in New Zealand is on 19th, so there's enough time for the players to get acclimatised to the conditions. The Ranji Trophy is the premier tournament in India and should be treated as such," Gavaskar wrote.