Ajinkya Rahane narrowly missed his maiden Test century against South Africa at Durban. The right-hander carried forward his form from the first innings where he was not out on 51. 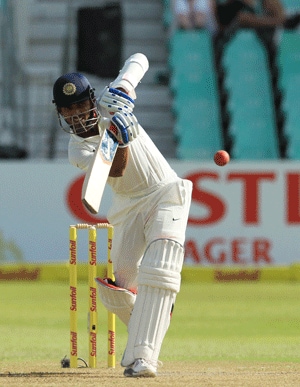 Ajinkya Rahane was unlucky to miss his maiden Test century by four runs as India were all out for 223 in their second innings on Day Five of the Durban Test on Monday. South Africa were left with 58 runs to win the two-match series after their bowlers got the better of the Indian top order batsmen in the first session of play. Rahane was the only man who stood like a rock. He was the last man out trying a lusty blow against Vernon Philander. (Scorecard)

At a time when wickets were coming thick and fast - India lost five wickets before lunch -- for the Proteas on the fifth day morning, Rahane looked like he was batting on a different surface, timing the ball to perfection on either side of the wicket. When the likes of Dale Steyn and Morne Morkel tested him with a barrage of short deliveries, Rahane did well to get behind all of them and showed immense patience. (Highlights)

Rahane's unbeaten knock of 51 in the first innings helped India go past the 300-run mark, when Steyn was in a mood to run over the opposition. His 96 off 157 balls, came at a far more crucial time for India as it frustrated the Proteas and did not let the South African pacers get on top of him. Rahane finally ran out of partners as India lost wickets at regular intervals. Desperation got the better of Rahane when India lost their ninth wicket, Ishant Sharma. The 25-year-old Mumbai right hander slapped Philander for a six at point but then lost his wicket by trying to play a wild stroke. (South Africa aim to give Kallis perfect farewell)

The slight-framed Mumbaikar has come a long way since his Test debut against Australia in New Delhi where he failed to capitalise on an opportunity to make a mark on favourable conditions and fell to two poor dismissals. He was named in the two-Test series against the West Indies but had to settle for a seat in the bench in what was Sachin Tendulkar's farewell series.

Yet, the selectors showed faith in the man who has an exceptional first-class average of just under 60, and named him in the line-up in both Tests in South Africa. The dividends of that move are well documented through his knocks in three out of the four innings he batted in.

Rahane's knock may not save India from conceding the series but the selectors have just found a rock-solid middle-order option in overseas conditions.