South Africa will not take their foot off the pedal in 3rd ODI, says Ryan McLaren

Ryan McLaren also said that the incessant rain at the Centurion could play spoilsport ahead of the third and final ODI against India on Thursday. 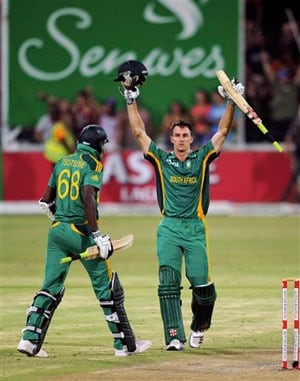 South Africa might have already pocketed the One-Day International (ODI) series against India with back-to-back wins, but all-rounder Ryan McLaren said that his side will not take their feet off the pedal and will play with the same intensity in the third and final match at the Centurion on Wednesday. (India look for consolation win)

McLaren said winning the three-match ODI series has given the psychological advantage to his side going into the Test series which begins on December 18.

"We thought our intensity might drop after the first match, but it was not so. We will definitely not let that happen here either. We are not a team looking for fear in the eyes of the opposition, but at the same time, we want to bowl aggressively and with energy," McLaren said at the match-eve press conference.

"We have kept up the intensity throughout and psychologically, we have made inroads going into the Test series," he said.

McLaren suggested that the insipid show by the Indians so far could be due to their inability to adapt quickly to the conditions. He, at the same time, emphasised that the home batters and bowlers have done a fine job.

"The Indians are a world-class side and ranked number one in the ODIs for a good reason. It is only a matter of adapting to the conditions. But we should not neglect the fact that our batsmen have batted well and our bowlers have taken early wickets against the top-three in the Indian line-up," he asserted. (MS Dhoni loses cool over his batsmen)

McLaren praised his bowling partner and tearaway fast bowler Dale Steyn for setting the tempo in the ODI series. He talked about the Proteas' bowling unit's adaptability, playing with and without Steyn and how they 'feed off him' when he is back in the eleven. "He bowls with great pace and works up some good aggression. Obviously we feed off his energy. Dale has not been playing ODIs all year round. As a bowling unit we have adapted to playing without him," he said about his senior team-mate.

"That's been a good point for our team, because as a bowling unit, we have done well this year. There are a lot of good bowlers in the squad and if one is not available, someone is always ready to step in and perform. That has been the key," McLaren said. (Sunil Gavaskar slams Indian bowlers)

South Africa are already up 2-0 in the three-match series. India suffered a huge 141-run defeat in the first ODI on Johannesburg before losing by 136 runs in Durban. With the series already in their bag and an important Test series coming up, the hosts could be looking to rest some of their important players. While Steyn and Morne Morkel are only fifty-fifty to play on Thursday, Jacques Kallis has already left the squad and returned home to Cape Town. In his place Henry Davids is expected to make the playing eleven. Asked if Kallis' departure may mean an increase in role for him, McLaren replied in the negative.

"Comparing me with Kallis is like comparing a City Golf with a Rolls Royce. Before Pakistan series in Dubai, we knew he was coming back to play ODIs and that did not step on my role. I bat at seven and bowl a few, and he bats higher up and bowls a few. My preparation and approach towards the game doesn't change," he said.

McLaren was also not part of the Test squad named on Wednesday despite some good showings in the past year. "I never take my position in this side for granted. I am happy with my consistent performances off late, but I want to be more consistent. I want to give 110 percent in every game. Of course, Test cricket remains the ultimate ambition," McLaren said.

Once again, rain looms large on the third ODI as it was pouring all day in Centurion on Thursday.

It does not, however, look like McLaren will get a chance to impress in the third ODI. It was bucketing down all day at Centurion today. If the pattern continues overnight, the game will either be curtailed or abandoned, despite the excellent drainage facilities at Super Sport Park.

"I hope the rain stops and we get to play, although it does not look good at this stage. South African weather can change very quickly. We always want to take the field and the fans here at Centurion will want us to do so as well. The support was fantastic in the first two games at Johannesburg and Durban, and we really enjoyed playing there," McLaren said. "They will anticipate a keen contest, despite not getting a seven-match series as originally planned. But we should not be complaining. We are up 2-0," he added.

Comments
Topics mentioned in this article
Cricket India Cricket Team South Africa Cricket Team Dale Steyn Ryan McLaren South Africa vs India 2013-14
Get the latest updates on IPL Auction 2023 and check out  IPL 2023 and Live Cricket Score. Like us on Facebook or follow us on Twitter for more sports updates. You can also download the NDTV Cricket app for Android or iOS.