India took complete control against South Africa (138/2 in second innings) on Day 4 with the hosts staring at a huge target on a challenging pitch. 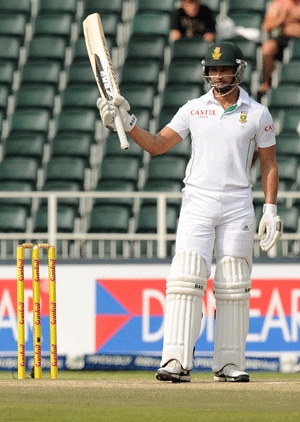 The first Test between India and South Africa seemed headed for an exciting finish with the hosts needing to score 320 runs with eight wickets remaining on a tricky last day to pull off a record-breaking victory here. (Highlights)

Set a stiff target of 458 for victory after India scored 421 in their second innings, the hosts put up a better batting display to reach 138 for two at close on the penultimate day today on a Wanderers track which seemed to have eased out quite a bit. (Pics)

Alviro Petersen (76 batting) and Faf du Plessis (10 batting) were at the crease at stumps on another absorbing day's play which has set the stage for a thrilling finish with all three results a possibility. (Scorecard)

A South African victory looks remote at this stage as no team has ever successfully chased down a target of 458 in Test history so far. The highest successful run chase in Test cricket has been achieved by West Indies who scored 418 for seven to beat Australia in St Johns in 2003.

With the pitch showing no signs of any rapid deterioration, the Indians may find the going tough to push for a 1-0 series lead on the final day's play tomorrow, considering that the Proteas have a strong batting line-up.

The Proteas, on the other hand, will look to bat out the entire day to avoid the embarrassment of a defeat at home.

Resuming at the overnight score of 284 for two, the Indians rode on the marathon 222-run partnership between Cheteshwar Pujara (153) and Virat Kohli (96) for the third wicket to take a substantial lead. (We have enough runs on board: Pujara)

The 222-run partnership was the highest stand for third wicket in a Test match second innings overseas. They bettered the long-standing record of 211 runs for the third wicket between Vinoo Mankad and Vijay Hazare at the Lord's in 1952.

Kohli was unlucky to miss out on a twin century as he was out for 96 in the opening session today after hitting 119 in India's first innings. South Africa's paceman Morne Morkel had twisted his ankle on day three and it's doubtful if he will bat tomorrow, if at all required. (Kohli misses out on milestone)

Earlier, after India were all out for 421 in the post-lunch session, captain Graeme Smith (44) and Peterson carefully negotiated the opening salvo from visiting bowlers for an hour to take the home side to 38 for no loss at tea.

Smith was nearly out in the third over of the innings, playing Zaheer off his pads towards leg gully where Virat Kohli nearly held on to a tough chance, getting his fingers to the ball. The South African captain was on one at that time.

Smith and Petersen batted in the same resolute manner after tea also, watching the incoming balls carefully and scoring runs whenever the bowlers strayed onto their pads.

To the Indian bowlers' credit, they bowled a lot better line than their counterparts managed all day. The trio of Zaheer Khan (9-0-29-0), Ishant Sharma (9-0-28-0) and Mohammad Shami (8-1-30-1) went past their bats on numerous occasions, unlucky to get a breakthrough in the first hour of play in the final session.

The two South African openers added 54 runs, with Petersen completing his half century in the 18th over. He contributed the majority of runs in the first-wicket partnership as Smith slowly built his innings. He was definitely more edgy of the two batsmen, with R Ashwin (16-3-40-0) nearly bowling him in the 23rd over and then Zaheer almost getting an edge in the 26th.

Notably, Ashwin bowled 16 out of the 45 overs sent down in the final session, pointing to the fact that the pitch may have something on the final day tomorrow.

In the 30th over, they reached the 100-run mark with worrisome faces on the Indian team. But Ajinkya Rahane eased their tensions when he ran out Smith with a direct hit in the next over. Smith hit six boundaries in his 73-ball innings.

Ten runs later, their number three batsman, Hashim Amla (4) was out just like in the first innings, out-bowled leaving a delivery from Shami, when he should have been playing at it. Du Plessis was sent ahead of Jacques Kallis, owing to his lack of runs. It became cloudy thereafter and the Indians tried every trick to keep the opposition batting, with Murali Vijay (1-0-3-0) and skipper Dhoni (2-0-4-0) coming on to bowl, as Virat Kohli kept wickets. Dhoni even kept wickets without his protective pads to hurry the overs in.

Earlier in the opening session, Pujara slammed 153 while Kohli missed out on an opportunity to score centuries in both innings by four runs.

The two batsmen put on 222 runs for the third wicket to set the hosts a daunting fourth innings' target of 458 runs for a win at the Wanderers stadium.

The 222-run partnership for the third wicket between Pujara and Kohli was the highest stand for third wicket for India in a Test second innings overseas. They beat the long standing record of Vinoo Mankad and Vijay Hazare, 211 versus England at Lord's in 1952.

Pujara and Kohli began the day on individual scores of 135 and 77, and team score of 284 for 2. The Proteas immediately took the new ball when it became due and the run-scoring did slow down as a result, but the milestones never stopped.

The 300 for India, in this second innings, came in the 85th over, while Pujara completed his 150 two overs later. This was the fourth time in his 16-Test career so far that he had gone past this individual score in an innings. He looked good for a bigger one, but the need to get runs quickly meant that he played an uncharacteristic cut stroke off a Jacques Kallis delivery, which was close to his body.

Kohli, meanwhile, carried on, even as Rohit Sharma (6) suffered another failure. He was bowled by Kallis in the 94th over, off an in-swinging delivery that stayed low. The big wicket for South Africa came when Kohli went on the backfoot for a cut off Duminy, in the 99th over of the innings, and was out caught behind. He was flustered with his dismissal, even so walked off to a standing ovation.

Dhoni then Ajinkya Rahane to muster some quick runs. They added 31 runs for the sixth wicket. But Rahane (15) fell at the stroke of lunch, out caught at slip off Duminy. India went to lunch with a hearty lead, placed at 358 for 6.