Dale Steyn and Ryan McLaren took three wickets each as India folded up for 217 runs in 41 overs. MS Dhoni's 71-ball 65 went in vain as India fell short by 141 runs. 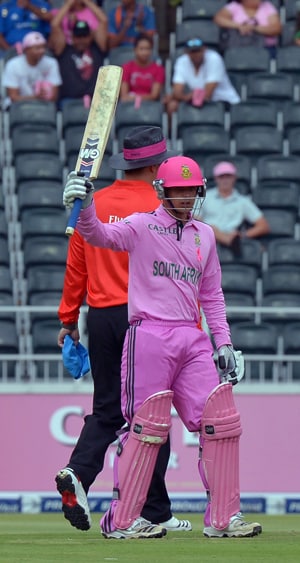 Hosts South Africa produced a clinical all-round performance as they crushed India by 141 runs in the first one day international taking a 1-0 lead in the three-match series. (Baby-faced pink panther Quinton de Kock stars - all the match pics)

This is the second biggest margin of victory by the South Africans against India in the ODIs played between the two teams. (Higlights)

After hammering the Indian bowlers into submission with a massive score of 358 for four, the five-pronged South African pace attack came out all guns blazing to bowl out the visitors for 217 in 41 overs. It was thorough professional performance by South Africa as Indians were outplayed in all departments. (Scorecard)

Skipper Mahendra Singh Dhoni fought gamely scoring 65 off 71 balls (8x4, 1x6) as most of the top-order batsmen found it difficult to counter the pace of Dale Steyn (3/25 from 8 overs), bounce generated by Morne Morkel (1/29 from 8 overs) and the controlled swing bowling by Ryan McLaren (3/49 from 8 overs).

The South African pace attack once again exposed Indian batsmen's inability to cope with pace, swing and bounce in adverse conditions after the trio of Quinton de Kock (135), AB De Villiers (77) and JP Duminy (59 no) pulverized the young Indian bowlers hitting them all around the park.

From the onset, Indian openers Rohit Sharma (18, 43 balls) and Shikhar Dhawan (12) found it difficult to score runs as Steyn and Morkel swung the ball at a great pace making life difficult for the batsmen. (De Kock proves he is no baby with the bat)

Rohit, in fact played and missed a lot of deliveries as got off the mark only in the 17th delivery that he faced. Dhawan on the otherhand hit three boundaries but when a Morkel delivery kicked up, the Delhi lad mistimed a pull-shot which was taken by wicketkeeper de Kock running backwards. (New ball bowling not upto the mark)

Rohit and Virat Kohli (31, 35 balls, 5x4) batted for nearly 10 overs adding 46 runs in the process. Steyn and Morkel bowled with controlled aggression as they gave away very little.

Morkel was unlucky not to dismiss Kohli batting on two, when he got one to kick from short of good length but de Kock in his bid to engage in premature celebrations dropped the nick.

Kohli in fact took a blow on the rib cage but played some lovely drives including a forward defensive push off Steyn that raced through extra cover while another on-drive off the very next delivery also fetched him a boundary.

A cover drive off Morkel and a pull shot from a McLaren delivery had touch of class.

However McLaren had the last laugh when he bowled one in the off-stump channel that moved away with Kohli dabbing at it and Kallis at first-slip took the resultant edge.

The lanky fast-medium bowler then rattled Yuvraj Singh with short ball followed by a fuller delivery that swung in to the left-hander hitting the middle-stump.

India lost their fourth wicket when David Miller at short cover effected a brilliant run-out with a direct throw that found Rohit short of his crease.

At 65 for four, Dhoni and Raina (14) had a partnership of 43 runs but a magnificent throw by Dale Steyn from deep square leg boundary saw Raina being run-out despite a desperate dive.

At 109 for five, the chances of an Indian win became bleak although Dhoni tried his best in company of Jadeja (29) adding 50 runs before Kallis castled the Saurashtra all-rounder. Dhoni lofted McLaren for a six to complete his 51st international half-century but ran out of partners.

Dhoni was the ninth batsman to get dismissed as he dragged one onto his stumps off Steyn's bowling as world's premier speedster ended the match when Shami offered a tame return catch.

Young de Kock batted splendidly upfront scoring a 121-ball-135 studded with 18 fours and three sixes as he added 152 runs for the opening stand with Hashim Amla, who scored a patient 65.

The foundation laid by de Kock helped De Villiers and Duminy to launch a furious assault on the Indian attack as 135 runs were scored of the last 10 overs of the innings.

De Villiers smashed his way to a 47-bal-77 that had six fours and four sixes while Duminy clobbered five sixes in his 29-ball-54 that also had a couple of boundaries. The duo added a whopping 105 runs in 7.4 overs to take the total beyond 350-run mark.

The Indians lost control from the start of the final 10 overs as Ravindra Jadeja (0/58 in 8 overs) leaked 17 runs.

The inexperience of new ball bowlers Mohit Sharma (0/82 in 10 overs) and Bhuvneshwar Kumar (0/68 in 9 overs) was evident as the South African batsmen played them with consummate ease.

Indian skipper Mahendra Singh Dhoni's decision to bowl first didn't work as per plan as two young swing bowlers struggled to adapt to the nippy, windy conditions and find the right line or length, as Amla and de Kock sped away from the blocks.

There was a flurry of boundaries from their bats as the duo hit seven fours and one six in the first nine overs. That one six was hit by Amla off Bhuvneshwar Kumar, a huge hit into the electronic score-board and at the end of the ninth over, the two batsmen had put on 53 runs at an encouraging run-rate of 5.88.

Kumar particularly was struggling with his control, conceding 29 runs in his first five overs. Mohit bowled his first six overs for 28 runs, and he was unlucky not to account for both batsmen. In the seventh over of the innings, de Kock sliced him straight down to third man when Shami was adjudged to have grounded the ball. The very next ball, a top-edge from Amla did not carry to Rohit Sharma at cover.

It was only when India's most successful bowler Shami (3/68 in 10 overs) was introduced into the attack that the two batsmen came under some pressure due to his extra pace.

Spin was introduced in the 15th over, as Ravichandran Ashwin came on to bowl. Dhoni started juggling his bowlers in search for a wicket, going back to Kumar and then bringing on Jadeja in the 18th over. The barrage of fours continued to flow from the bats of Amla and de Kock, as South Africa crossed the 100-run mark in the 22nd over.

On either side of that milestone, both batsmen completed their half-centuries. De Kock was the first to get there, off only 54 balls, with eight fours. Amla reached his fifty off 73 balls, hitting four fours and one six. Both batsmen made steady progress thereafter, settling down as Indian bowlers struggled to find their rhythm in alien conditions.

Shami finally broke the partnership when Amla was gone dragging one onto his stumps. He was out for 65 runs off 88 balls, with five fours and one six.

Shami also got rid of Jacques Kallis (10) in the 33rd over, and the double jolt meant that only 32 runs came off the batting Powerplay.

At the other end, de Kock continued his run-scoring spree and hit a huge six off Mohit Sharma in the 33rd over. That took him to 98 runs and four balls later he celebrated his second ODI hundred with a simple single to square leg.

The 20-year-old didn't stop there, hitting two more sixes as well as three fours to record his highest ODI score of 135 runs. He was the third batsman dismissed in the 42nd over, a loose drive looping back to Virat Kohli (1-15).

De Villiers was the relatively silent batsman in this 75-run partnership that came up in just nine overs. After de Kock's dismissal, he was joined at the crease by JP Duminy and together they put the Indian attack to the sword in the final overs.

Comments
Topics mentioned in this article
Cricket MS Dhoni Dale Steyn Quinton de Kock Ryan McLaren India Cricket Team South Africa Cricket Team South Africa vs India 2013-14
Get the latest updates on IPL Auction 2023 and check out  IPL 2023 and Live Cricket Score. Like us on Facebook or follow us on Twitter for more sports updates. You can also download the NDTV Cricket app for Android or iOS.