India lost the final Test and the series vs South Africa but MS Dhoni's side has had a good run of form overall this year, ending with six wins, one draw and one loss in the eight matches they have played. 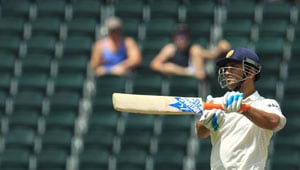 India lost the final Test and the series vs South Africa but MS Dhoni's side has had a good run of form overall this year, ending with six wins, one draw and one loss in the eight matches they have played. (Match report)

After drawing the first Test at Johannesburg, South Africa pulled off a comprehensive 10-wicket win at Durban to clinch the two-Test series 1-0 over India. While there was no trophy for him, India skipper Mahendra Singh Dhoni said he had a truckload of experience from the tour. (Highlights)

Starting Day 5 on 68-2 - 98 runs behind the hosts, the onus was on Indian batsmen to counter a wounded tiger in Dale Steyn and his entourage who were doing an exceptional job of supporting him. It was perhaps, the biggest test yet for the Indian batsmen. "I think the first session was crucial. We didn't start very well and played a couple of bad shots," said Dhoni, summing up his team's performance on the final day of the series. (Pics)

Yet, he claimed that this was a great learning curve for a side filled with a lot of players who hadn't played in South Africa before.

The 'next generation' batsmen in the Indian line-up, like Virat Kohli, Cheteshwar Pujara and even Ajinkya Rahane took to the big stage and put in exceptional performances with the bat. Dhoni was all praise for his top-order for being able to adapt to alien conditions in such quick time. "I think in these 2 Tests, we've learnt a lot. I think its a big learning curve for our batsmen. With the little amount of time they had to prepare, it was a great learning experience," he said.

His bowling unit too has been under constant scrutiny in the last few months, the pressure only mounting after a dismal show in the ODI series. Dhoni however jumped to their defense, saying, " More often than not in this series, we bowled more than 100 overs. I think they did very well."

To sum up the last four weeks for Indian cricket, Dhoni said, " Overall the whole series has been fantastic."

Dhoni also had a few words of praise for Jacques Kallis, who played his 166th and final Test for South Africa at Durban, naming him a luxury for the Proteas.

"Kallis is a fantastic cricketer and has been a luxury for South African cricket," said the 32-year-old.

Dhoni also shared an anecdote from an old Test match that fascinated him a lot. "We played a Test in Chennai. During the entire course of the game, Kallis moved in the slips from one end to another and didn't say a word. He just kept staring. He doesn't speak much," he said in a lighter vein.

Comments
Topics mentioned in this article
Cricket MS Dhoni South Africa Cricket Team India Cricket Team South Africa vs India 2013-14
Get the latest updates on ICC T20 Worldcup 2022, check out the Schedule and Live Score. Like us on Facebook or follow us on Twitter for more sports updates. You can also download the NDTV Cricket app for Android or iOS.