India eight wickets away, South Africa aim to save Test

South Africa will have to either see out 90 overs for a draw or chase down 320 runs for victory. While the former looks the more likely option for the hosts, the odds remain on India to go 1-0 up in the two-match series. 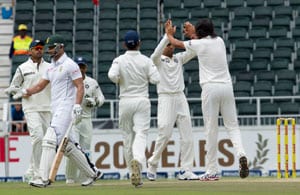 After being outplayed by India for three out of the first four days of the first Test between the sides, South Africa will have to bat to the best of their ability to avoid losing the match at the Wanderers Stadium in Johannesburg.

For a positive result South Africa will have to either see out the 90 overs for a draw or go all the way by attempting to score the remaining 320 runs needed for victory. At the close of play on Day 4, the Proteas had scored 138/2 in their second innings in pursuit of a world record victory target of 458. The former looks the more likely option but at this stage the odds remain on India to go 1-0 up in the two-match series. (We have enough runs, says Pujara)

The Proteas probably had the better of all three sessions on Saturday as they worked their way through the Indian second innings with their weakened bowling attack after the injury to Morne Morkel. The hosts did well to recover from the 222-run partnership between Cheteshwar Pujara and Virat Kohli and bowl the Indians out for 421. Pujara went past 150 for the fourth time in his Test match career to finish on 153 (270 balls, 21 fours) while Kohli finished four runs short of his second century in the match (193 balls, 9 fours). (Related: Kohli falls short of Test milestone)

Once the partnership had been broken the Proteas took the last eight Indian wickets for 106 runs, thus removing the need for MS Dhoni to make a declaration. Vernon Philander and Jacques Kallis finished with identical figures of 3/68 while the two spinners, JP Duminy and Imran Tahir, took two wickets each. (Day 4, as it happened)

At the start of the fourth innings, the Proteas had been left with 135 overs to either survive the Indian attack or chase down victory. This compared with the 148 overs that they batted out to secure a memorable draw against Australia at Adelaide a year ago or the 163 overs that Mike Atherton's England team survived against the Proteas at the Wanderers Stadium in 1995.

The Proteas added exactly 100 in the final session but suffered two important losses when skipper Graeme Smith ran himself out and Hashim Amla's judgement let him down for the second time in the match as he ducked under a short ball from Mohammed Shami that did not bounce as much as he expected and cannoned into his stumps. Much will depend on Alviro Petersen (76 off 148 balls, 9 fours) to get the Proteas through the vital first hour on the final morning. Faf du Plessis came into bat at No. 4, no doubt to give Kallis the opportunity to freshen up after his marathon effort of 20 whole-hearted overs in the Indian second innings.