Jacques Kallis announced that the Durban Test against India will be his last. Former cricketers remember his fine contribution with Shaun Pollock saying the all-rounder was responsible for taking to new heights. 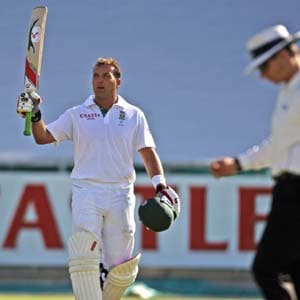 Former South African captains Shaun Pollock and Kepler Wessels praised Jacques Kallis as one of South Africa's all-time great cricketers following the announcement that he will retire from Test cricket after this week's match against India at Kingsmead.

Pollock said on Thursday that Kallis had been responsible for taking South African cricket to a new level, as an all-rounder and specifically as a batsman.

"When I started playing, the benchmark for Test batsmen was an average of 40. There were some guys in other countries, pushing the envelope, averaging 50, and Jacques took our guys to the next level."

"The statistics speak for themselves. He didn't try and draw attention to himself, he just knew what his ability was and he went about it daily, doing his best for South Africa.

"He deserves all the credit he gets. There is no doubt he will be missed. He will go down as one of the legends. I can't compare him with (Garry) Sobers because I never saw Sobers but he is surely one of the greatest of all time."

Wessels, whose playing career spanned that of Kallis as well as those of Graeme Pollock and Barry Richards, South Africa's only two members of the International Cricket Council's hall of fame, said the total package provided by Kallis made him "probably the best player South Africa has produced.

That comes in a rich tradition of magnificent players, so that's saying something. I'm not going to compare him against Pollock and Richards because they were specialist batsmen but he batted as well as they did, he bowled exceptionally well and he caught very well."

Both former captains said they were not totally surprised by his decision to retire, although both said they had thought he might prolong his Test career until the end of an upcoming series against Australia, which ends at Newlands, his home ground, in March.

"You just know when it is time to go," said Wessels. "Rather too early than too late. You realise that maybe your best days are behind you. You have set a certain standard and you don't want to perform below that. "

"I thought he would try and go out against Australia at Newlands but you know your own body," said Pollock. "If you reach a stage where you don't have the motivation or feel you can't give of your best you know it's time to go."

Pollock and Wessels both said Kallis, 38, had set himself a tough target by stating he wanted to continue to play one-day international cricket until the 2015 Cricket World Cup in Australia and New Zealand.

"As long as he keeps fit and plays in some one-day tournaments there is no reason why he can't play in the World Cup," said Pollock.

"The next one-day tournament is six or seven months away but if he believes he can do it I am sure he can make it."

Wessels also said fitness would be factor if Kallis was to give himself a chance of fulfilling his last remaining ambition - to be part of a South African team that won the World Cup.

"He brings a lot to the team," said Wessels.

"It is just a case that it is quite a long time to the World Cup but if he keeps himself busy, plays in the Twenty20 tournaments and plays as many one-day games as he can, it shouldn't be too difficult."

Indian batting legend Sunil Gavaskar, who is commentating on the South Africa-India series, said Kallis was "one of the greatest of all time."

Gavaskar said Kallis would have to be considered for a world all-time XI.

"There have been many great all-rounders but not all of them could be selected as either a specialist batsman or a bowler, which has been the case with Kallis. It is difficult to compare different eras but to me Kallis was unique."

Current South African captain Graeme Smith said at the toss: "It's been an emotional few days. I have been chatting to Jacques since before the first Test. We want to put in a special performance for him in this match. He is probably the greatest cricketer to come out of our country."

Kallis led the South African team onto the field at the start of the match to a standing ovation from the spectators. Umpires Steve Davis and Rod Tucker also applauded Kallis before taking up their positions.