Quinton de Kock was named Man of the Series for his record 342 runs in the three ODIs against India. He emulated Herschelle Gibbs and AB de Villiers in becoming the third South African to record three consecutive ODI hundreds. 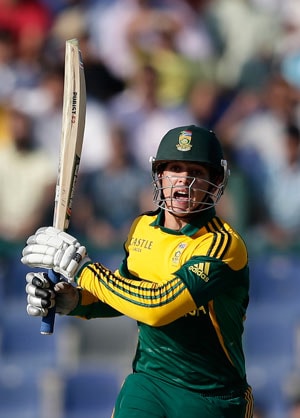 Describing his hundred in the washed out third and final ODI against India as the toughest of the series, young South African batsman Quinton de Kock said his work ethic and confidence has improved manifold in the three matches.

At the SuperSport Park, in skipper AB de Villiers' company, he scored his third successive ton in the series and took South Africa to 301 for 8, before incessant rain didn't allow India to reply.

"It was a tough wicket to bat on. We had to fight for runs and the scoring was tough after we lost quick wickets. So probably it was one of the harder hundreds in these last three," said the man-of-the-series.

"But I have grown up a lot during these three knocks. My confidence is up, at a level it has never been before. My work ethic has improved as well," he added.

For sure, since De Kock scored 342 runs, the most ever in a three-match ODI series. In doing so, he emulated Herschelle Gibbs and AB de Villiers' record of scoring three consecutive ODI hundreds. (Read: De Kock was lucky to survive dropped chances, says Ishant Sharma)

India's Ishant Sharma put it down to luck, which the youngster, who considers former Australian opener-cum-keeper Adam Gilchrist as his role model, was quick to laugh off.

"Of course, Ishant is right, I was lucky," he joked.

"Today I was dropped twice and I was angry with the chances I had given to them."

Even so, despite his purple patch, de Kock will not be part of the Test side and as such it comes as a relief to the Indian team.

"Anybody will like to be part of the South African Test team. But everything happens for the good. So I will go back to playing four-day cricket and hopefully get some runs there," he signed off.