South Africa chased down a small target of 58 without losing a wicket after India were all out for 223 in their second innings in the post-lunch session. 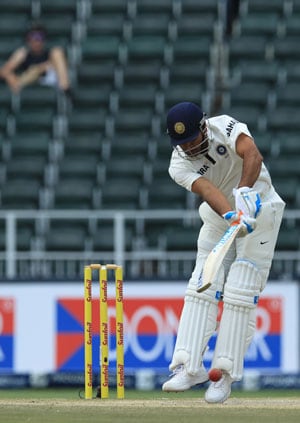 Captain Mahendra Singh Dhoni on Monday rued a couple of bad decisions which went against his side in India's 10-wicket loss to South Africa in the second cricket Test here to lose the series 0-1, saying they were "at the receiving end" in the match. (Team could have done better: Dhoni)

"The first session was crucial, we did not start well, a couple of bad decisions, tough decisions, a couple of bad shots. We were at the receiving end," he said after India lost the final Test on the fifth and final day at the Kingsmead here. (South Africa series was a good learning curve: Dhoni)

South Africa chased down a small target of 58 without losing a wicket after India were all out for 223 in their second innings in the post-lunch session. (Match report)

Two decisions seemed to have gone against India, including that of key batsman Virat Kohli's dismissal. Kohli was adjudged out by the umpire but he apparently did not make contact with Dale Steyn's delivery and the ball seemed to have brushed his shoulder on its way to the keeper. Later, Zaheer Khan's dismissal was also debatable as the television footage showed the ball could have missed the leg stump. (Highlights)

Dhoni, however, said that he was happy with the performance of his young team. (Scorecard)

"I'm very happy with the performance, especially of the bowlers, without the luxury of an all-rounder. Overall, only a few of the top order had played more than five Tests outside the subcontinent, great experience for them to play the toughest side," he added. (Pics)

"They (bowlers) bowled to the plan that they had. They must have learnt a lot out of these two games, also that Test cricket is about all five days, you may play one bad session and that will have an impact on the game itself." South Africa captain Graeme Smith described the win as "incredible", considering that India were on a strong position on the opening day of the second Test.

"An incredible win, considering the weather and that they were 180 for 1 on the first day. India always difficult, one of the teams we haven't beaten in a while. At Wanderers we were behind the game for 90 per cent of the time," he said.

"The wicket didn't make it easy for us in Durban. It was almost as if we were playing in India, we fronted up superbly well. Kallis hit a hundred and we batted around him. India were under pressure this morning. To see Dale (Steyn) bowling like that this morning, Robbie P four wickets today, it was great win."

Man-of-the-Match Dale Steyn said Kallis told the players that he did not want the Test, his farewell match, end in a draw.

"I'm pretty stoked. Jacques sat us down on the second day and said he didn't want this game to end in a draw," he said.

Steyn, who took nine wickets in the match, said he would "remember the wicket of Cheteshwar Pujara for a while".

Asked about becoming the second fastest bowler to reach to the 350-wicket mark, Steyn said, "Pretty proud of that (350 wickets), but it would not have happened if I wasn't part of this incredible team I'm part of. Got to thank the team and everybody else." (Steyn completes 350 Test wickets)

Man-of-the-Series AB de Villiers said he was enjoying his wicket-keeping.

"I've been working hard on my keeping, getting tips from Bouchie (Mark Boucher) on the side. I really enjoyed the keeping, and the Test win.

"I enjoyed all the criticism Steyn was getting in Jo'burg as I knew something was brewing in his system, a man for the big occasion."

On Kallis retiring from Test cricket, de Villiers said, "I consider myself very lucky to have played in Kallis' last Test, very special to walk around the ground and think of all those memories. He's been a rock to this team."