Robin Petersen himself scored 62 runs, but deemed that Jacques Kallis' unbeaten knock of 78 as more important in placing the Proteas just 35 runs behind the visitors at close of play. 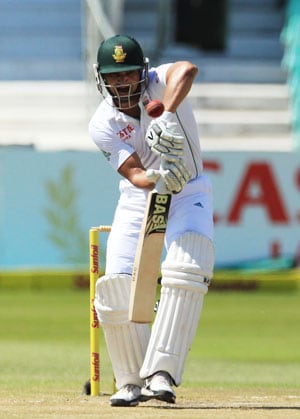 South Africa's opening batsman Alviro Petersen has said that Jacques Kallis in his last Test, is "playing the perfect innings for his team".

Petersen himself scored 62 runs, but deemed that Kallis' unbeaten knock of 78 as more important in placing the Proteas just 35 runs behind the visitors at close of play. (Day 3 report)

"Jacques played the perfect innings for the situation we were in. He hadn't faced a ball yet, when AB (de Villiers) walked in. To soak that pressure and to stay tall, in your last match, is phenomenal. He didn't look like he is playing his last Test. He looked in his prime," Petersen said at the day end press conference. (Scorecard)

"Jacques is not going to cruise this match. We know him, he will not be nervous because he is approaching his hundred. That's the way he bats and holds the innings together. He will be key for us tomorrow, trying to go past India's score and then guiding the lower order," he added. (Highlights)

Kallis stroked his way to an unbeaten 59th Test fifty. But before he lined up to bat, he was given a guard of honour by the Indian players and the two umpires. (Kallis given guard of honour)

"It was quite nice of the Indian team to do that and for the umpires to get involved as well. Jacques' career has been brilliant. The situation belonged to him and it was great of everyone on the pitch to do that," he said. (Pics)

Ravindra Jadeja proved to be an ideal opponent as he was the stand-out bowler for India with figures of 4-87, as India's seamers tried hard to contain the South African batsmen.

"It was difficult to play him. He didn't give many scoring areas with the line and lengths he bowled. When the pitch is turning, you cannot play certain shots, and so we played well enough to be in this position. We would have liked to lose fewer wickets to Jadeja and make them bowl their seamers more, but we put pressure on their bowlers nicely," said Petersen.

Even so, play was called off nearly an hour earlier than scheduled, after rain and bad light intervened for the third time in three days. It leaves very little for South Africa to force a win in this last Test for Kallis as has been spoken out by the team recently.

"We need to bat past them first and see how far we can bat past them to try and put them under pressure. Time is a problem because we won't get a full day's play in Durban. With the wicket turning, we don't want to bat last on it, so we need to bat as long as possible tomorrow, while keeping the time in mind," he said, outlining day four's strategy for his team.

"We are keeping an eye on the weather. But sometimes when you try and push a game you get into trouble. So we need to get to that stage of putting pressure on them first," he said, signing off.

Comments
Topics mentioned in this article
Cricket India Cricket Team South Africa Cricket Team Sri Lanka Cricket Team Highveld Lions Alviro Petersen Ethan O'Reilly Richard Cameron Jacques Kallis South Africa vs India 2013-14
Get the latest updates on SA vs IND 2021-22, check out the Schedule and Live Score . Like us on Facebook or follow us on Twitter for more sports updates. You can also download the NDTV Cricket app for Android or iOS.