It's the right time to retire from Test cricket, says Jacques Kallis

Jacques Kallis said the decision to quit from Test cricket was his own though he consulted his team-mates. 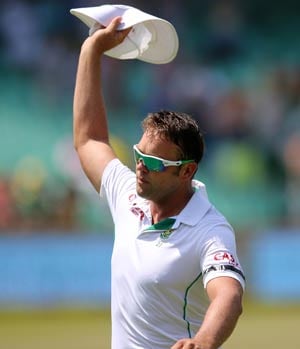 South Africa's legendary all-rounder Jacques Kallis, who bid adieu to Test cricket after helping his side to a series-clinching win in the second Test against India, said it was right time to call it quits from the longest format of the game as his body and mind was losing the "edge". (Match report)

"I just felt I lost that little bit of an edge, because mentally it is quite tough over the five days. If I can't give 100%, I don't want to be bringing a team down. I had 18 wonderful years. I woke up and said it is time. I am 100% convinced that it is. When I started playing, I said I wanted to leave in a better state than what I joined it, hopefully I've done that," he said at the press conference after South Africa beat India by 10 wickets in the final Test here. (Highlights)

He said the decision to quit from Test cricket was his own though he consulted his team-mates. (Experience mattered: Kallis)

"I planned it with Graeme Smith and Mark Boucher. It was totally my call. There were no outside influences," he said. (Scorecard)

He finished one run ahead of India's Rahul Dravid to finish as Test cricket's third highest run-scorer, behind another Indian Sachin Tendulkar (15,921) and Ricky Ponting (13,378). He also has 45 Test centuries to his name, the last of which came in this final match against India here.

"I've never played the game for records and stats. I've always tried to play the game to make the best calls and play the situation. Records have never been important to me. I don't think that record of Sachin Tendulkar will get beaten very easily. I am proud of what I achieved 10,000-plus runs, that's something to be proud of," said Kallis, who is still available for ODI format. Kallis said he had always believed in playing hard but not crossing the boundaries.

"I have always tried to lead from the front. Never been one to shout my mouth off, I just tried to get the job done, quietly pass on the knowledge that I have. I have always believed you play the game hard on the field without crossing boundaries. At the end of the day, you still want to have mates. If you can go to most of the players you've played the game against and have a beer, you could," he said.

Kallis walked away with much adulation from Cricket South Africa, his team-mates and everyone who is attached with the Proteas, especially the fans here. They gave him a rousing reception when he walked off after the victory, and was even paraded around by his team-mates on their shoulders. It was an apt end for him, after he made his Test debut at the same ground, Kingsmead, in 1995 versus England.

"That first Test match I played here, I was a nervous little kid. At that stage, you don't know much about the game or your own game. To play 166 Test matches, I don't think anyone ever dreams of that. I am thankful for every game I played, right up until the last one. I always gave everything I had," he said.

"It would have been nice to end off at Cape Town since it was my last home ground. But three, four months are a long way down the road with a few Tests to go and a tough series against Australia coming up. It was a tough call for me," he added.

Of course, being part of South Africa's ODI set-up is now his most important aim, particularly with the 2015 World Cup looming large.

"Retirement is going to free me up a little bit. To concentrate a whole year on ODI cricket and not worry about Tests, I'm very excited. We will manage the workload. I would like to play in most of the one-day cricket.

"I'll just try to become the best player I can. I'll play some T20s, to make sure I keep playing. By the time the 2015 World Cup comes, if I am good enough and selected hopefully I will be playing best ODI cricket of my life," he said. That will also give Kallis a lot of time to spend away from the field, while he concentrates only on the limited-overs format. And he intends to use it wisely.

"The game has given me so much I would like to give something back, like passing on knowledge. In the future who knows, maybe I will be a batting mentor. I haven't worked out exactly where I'm going to go with that," he said.

"Maybe I will play some golf and do normal things that people do. I won't travel every couple weeks. I will spend time at home, with people I haven't had the opportunity to spend time with. Last year was the first Christmas in 18 years I spent at home. That was an eye-opener for me and I'd like to catch up," Kallis said.

Comments
Topics mentioned in this article
Cricket India Cricket Team South Africa Cricket Team Jacques Kallis South Africa vs India 2013-14
Get the latest updates on Fifa Worldcup 2022 and check out  Fifa World Cup Schedule, Stats and Live Cricket Score. Like us on Facebook or follow us on Twitter for more sports updates. You can also download the NDTV Cricket app for Android or iOS.