Jacques Kallis admits he was nervous in the nineties, but experience mattered

Jacques Kallis scored 115 in his farewell Test at Durban to give South Africa a handy lead and a chance to win the two-Test series vs India. 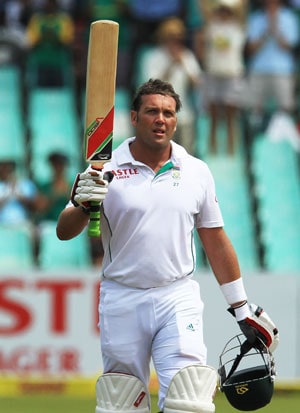 Jacques Kallis, who's century helped South Africa take a 166-run first innings lead in the second Test vs India at Kingsmead, said he will cherish scoring a ton in his last Test after a 18-year career. Kallis' innings was the perfect script of what is shaping into a fairytale ending, and paved the way for a big first-innings total for the Proteas in Durban.

"It is a special feeling," he said. "It's strange walking out to bat knowing that there is no tomorrow and it will be your last opportunity to get a 100 for your country.

Kallis spoke of the difficulty and application needed during his innings, which was well paced under testing circumstances.

"In the situation that we were in it was important to consolidate a bit and make sure we got back on track after losing a few wickets," he said. "We basically tried to pace the innings and to keep the scoreboard ticking. It was quite difficult to score because the wicket is quite slow, they put up defensive fields and bowled quite defensively.

"As we got closer to their total we could afford to be more positive. I thought the rest of the guys really paced the innings well."

India ended Day four on 68 for two, with Chetestwar Pujara and Virat Kohli at the crease, trailing the hosts by 98 runs. Robin Peterson, who starred with bat and ball on Sunday, said the Proteas were backing themselves to take the last eight Indian wickets for the win. (Day 4, as it happened)

"We have lost a lot of time in the game but I think there is a result beckoning for us," he said. "The stats show that on day five at Kingsmead 10 wickets normally fall, so hopefully we are on the right side of the result. Monday morning's session will be crucial to see if we can push for the win. Luckily we have two wickets already and hopefully the bowlers will come out firing after a good rest.

"It looks like he (Kallis) is enjoying himself in his last game," Peterson said of Kallis' mood. "He richly deserves to do that, all the guys just want him to enjoy his last moments."

Comments
Topics mentioned in this article
Cricket South Africa Cricket Team India Cricket Team Sreesanth Jacques Kallis Robin Peterson South Africa vs India 2013-14
Get the latest updates on SA vs IND 2021-22, check out the Schedule and Live Score . Like us on Facebook or follow us on Twitter for more sports updates. You can also download the NDTV Cricket app for Android or iOS.