Fantastic performance by team but could have done better: MS Dhoni

The opening session was indeed vital and India got off to the worst start possible when Dale Steyn got key batsman Virat Kohli in the very first ball of the day. But the delivery had come off his shoulders and he was given out wrongly, bringing the question of DRS back into focus. 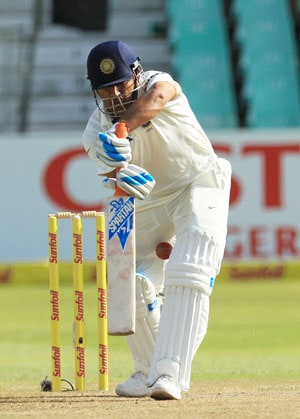 Indian skipper Mahendra Singh Dhoni on Monday blamed losing too many wickets in the morning session and some poor umpiring decisions for their 10-wicket defeat in the second Test against South Africa but applauded the way his team played in the series. (South Africa series great learning curve: Dhoni)

The opening session was indeed vital and India got off to the worst start possible when Dale Steyn got key batsman Virat Kohli in the very first ball of the day. But the delivery had come off his shoulders and he was given out wrongly, bringing the question of DRS back into focus. (Match report)

"In the morning session today, we lost too many wickets. There were a few decisions that didn't go our way and then there were a couple deliveries that were good. At the same time, we also had soft dismissals which we couldn't afford given where the game was positioned at that time," Dhoni said at the post-match press conference. (Highlights)

"There were a couple of sessions in both Tests where we played badly and that had an impact on both matches. Even in the last Test we were in position of bother in the last session on day five. (Pics)

"In this Test we started off well, but in just one session we were off-target. So as these young players play more Tests and gain experience they will learn to capitalize on moments. For example, when opposition bowlers are tired, that's when you get free Test runs. Overall, fantastic performance but we could have done better," he added, rating his team through the series.

Asked if DRS should come into play, considering the decisions that went against India, Dhoni did still not seem convinced on the reliability of the technology.

"There were few teams that were big time supporters of DRS previously, now they are against DRS. When it goes your way, it is good, but when it doesn't it's not good. There will be a few human errors in the game. If there are no human errors then batsmen won't get out and bowlers will keep bowling in one area. It is part and parcel of this game, as long as they are not blunders."

"I don't want a security guard that will protect me during the day and leave me from 9pm to 9am to guard myself. I want 24 hours security," he added, joking about the complex DRS situation.

Dhoni also defended India's strategy of not taking the new ball until the umpires forced them to after 146 overs.

"It was Christmas time, but I am not Santa to give them free runs," said Dhoni. "It was about strategy. If we took the new ball, it would not swing. Who will bowl 25 overs then to get reverse swing? Also, Jadeja would not have been effective with the new ball. From the moment we started bowling on this pitch, we knew reverse swing was our only option."

"When Kallis came to bat, they needed a big partnership. He countered our 3 fast bowlers and 1 spin bowling attack and played a fantastic innings," Dhoni added.

For India, the stand-out performers in this Test were Ravindra Jadeja and Ajinkya Rahane, both playing their first overseas Test series and Dhoni praised them.

While Jadeja took his best Test figures of 6-138 in the first innings, Rahaner came good with two half-centuries in two innings, with a personal best of 96 in the second effort.

"Jadeja took wickets and at the same time he kept one end tight. It meant that I could keep my fast bowlers fresh and rotate them, attacking from one end. This is the best option for us, because we can't play two spinners overseas until we find a fast-bowling all-rounder," opined the Indian skipper.

"Rahane batted really well, given the amount of time he has spent on the bench. He has worked hard on his fitness, his technique and approach to the game and he has grasped his chance when it came by," he added.

While South Africa managed to reverse their trend here, finally wining in Durban after a string of four losses on the run, India, despite the defeat, can return home with their heads held high, according to Dhoni.

"We have had plenty of positives from this series. The batting is looking good and the bowlers took twenty wickets in helpful conditions in Johannesburg. They will get better by playing more Tests and getting more exposure.

"The bowlers need to learn how to get wickets on dry wickets overseas. Overall, we have a 15-17 member squad that is looking good. We have got fantastic ingredients. We didn't cook so well in this match, so going ahead, we need to cook the right recipe," Dhoni signed off.

Comments
Topics mentioned in this article
Cricket India Cricket Team South Africa Cricket Team MS Dhoni South Africa vs India 2013-14
Get the latest updates on Fifa Worldcup 2022 and check out  Fifa World Cup Schedule, Stats and Live Cricket Score. Like us on Facebook or follow us on Twitter for more sports updates. You can also download the NDTV Cricket app for Android or iOS.