Dale Steyn returns to his best with six-wicket haul

Sunil Gavaskar called Dale Steyn a 'class act' and said that it was he who restricted India to a sub-standard total. 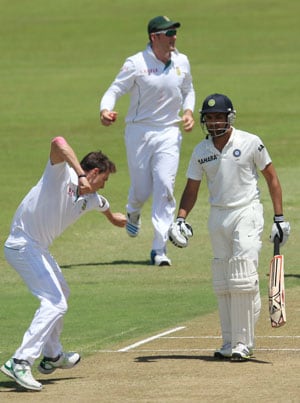 In the thrilling first Test draw versus India in Johannesburg last week, South African speedster Dale Steyn ended with unflattering figures of 1 for 165 in 56 overs. However, as expected, Steyn bounced back with a vengeance to run through the Indian middle-order in the first innings of the second Test in Durban as India were bowled out for 334 on Friday.

India started a rain-delayed Day 2 at Kingsmead, Durban at 181 for one but Steyn ensured that India were not able to press home their advantage. The 30-year-old took six for 100 in 30 overs as the visitors were bowled out for 334. He became the first South African bowler to take six wickets or more in an innings three times against India. The first two instances were 7 for 51 in Nagpur in February 2010 and 6 for 50 at this very ground in December 2010.

NDTVs cricket expert Sunil Gavaskar said the weather aided Steyn in his bowling effort. "The moisture on the pitch meant that there was a lot more carry for the pacers. The way Steyn mixed the short and fuller-length deliveries was impressive," said Gavaskar. (Day 2, as it happened)

Steyn picked up the crucial wickets of Cheteshwar Pujara, Murali Vijay and Rohit Sharma in one spell and ended India's innings, accounting for MS Dhoni, Zaheer Khan and Ishant Sharma with the second new ball. "Once I got momentum, my tail was up and I picked wickets unlike in Johannesburg," said Steyn at the end of the days play. "Allan Donald (bowling coach) said that it was one of my best five-wicket hauls, because I had gone so long without taking a wicket." (Proud of my comeback, says Steyn)

Durban has proved to be a happy hunting ground for Steyn as he became just the third bowler to capture 35 wickets or more at this venue. He has 35 wickets in seven Tests at Kingsmead at an average of 23.88 behind only Shaun Pollock (44 wickets in 12 Tests) and Makhaya Ntini (43 wickets in 10 Tests). Steyn is also the first bowler to produce four five-wicket hauls here, eclipsing the three fifers by late South African off-spinner Hugh Tayfield.

Steyn's six wickets has taken his tally to 48 wickets in nine Tests this year at an excellent average of 17.79. Only English pacers Stuart Broad (62 wickets) and James Anderson (52 wickets) have been more successful in 2013 but duo are currently playing their 14th Test of the year.

"Steyn is a class act, no question about it" added Gavaskar. "He is the No.2 bowler in the world now and it was he who restricted India to 334."

Comments
Topics mentioned in this article
Cricket Sreesanth Dale Steyn Sunil Manohar Gavaskar South Africa Cricket Team India Cricket Team South Africa vs India 2013-14
Get the latest updates on IND vs NZ 2021, check out the Schedule and Live Score . Like us on Facebook or follow us on Twitter for more sports updates. You can also download the NDTV Cricket app for Android or iOS.