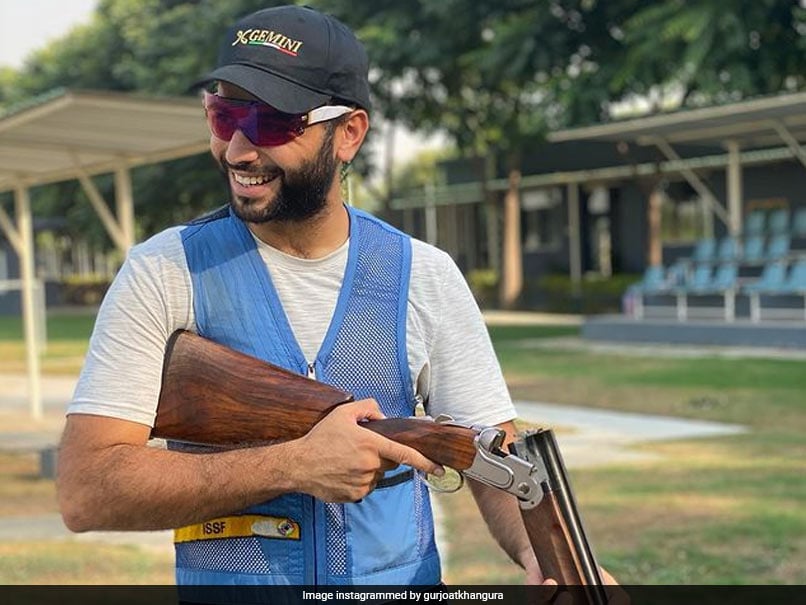 Gurjoat Khangura was part of the Indian team that won gold in the men's Skeet Team event.© Instagram

India won gold in the men's Skeet Team event on Monday at the ISSF World Cup. India beat Qatar in the final to win the country's sixth gold medal at the World Cup. India continued its good showing in the ongoing ISSF World Cup being held in Delhi after the men's team won gold and the women's Skeet team bagged another silver medal for the country on Monday. The Indian men's team, comprising Gurjoat Khangura, Mairaj Ahmad Khan and Angad Vir Singh Bajwa beat Qatar's Nasser Al-Attiya, Ali Ahmed Al-Ishaq and Rashid Hamad 6-2 in the final.

This was India's sixth gold at the World Cup, with the hosts leading the overall medal tally.

All three in the Indian men's team hit 15 out of 16 targets as they overcame a poor start to win the final. Al-Ishaq was in terrific form for Qatar, hitting all 16 targets, but his two teammates missed three each, leading to their defeat.

Kravchenko, who had won the silver medal in the women's Skeet individual event, losing to Amber Hill in a shoot-off, was once again in fine form and led the Kazakh team well with 15 successful shots.

Panarina though was the surprise package for the Kazakhs, hitting the target 15 times. She managed to cover up for Nassyrova who had only 12 successful shots.

For the Indian team, Dhaliwal outshot her two compatriots who were part of the individual women's Skeet final. She managed to hit the target 15 times.

By contrast, Sekhon and Shaktawat struggled to find their form. Shaktawat, who had finished fourth in the individual event, had 13 successful shots while bronze medallist Sekhon ended up hitting the target 13 times as well.