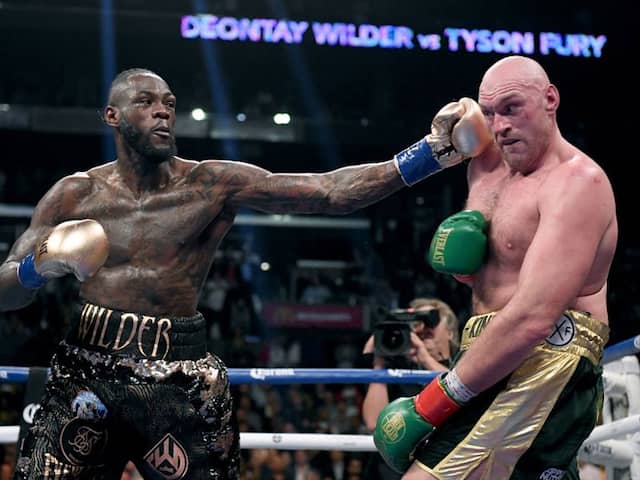 Deontay Wilder and Tyson Fury battled to a controversial split-decision draw in their WBC heavyweight title showdown Saturday, triggering immediate demands from both camps for a rematch. Wilder, who retains his WBC belt after 12 rounds of pulsating action, had Fury on the canvas twice at the Staples Center in Los Angeles but was unable to deliver the knockout he had promised his fans. The three judges were divided on the outcome, with one scoring it 115-111 for Wilder, another 114-112 for Fury and the third 113-113.

But while the scoring drew criticism, with many arguing that Fury had done enough to win, there was a marked absence of animosity after the bout.

Instead, the main talking point from a thrilling contest was Fury's miraculous recovery after being knocked down by Wilder in the 12th round.

The 30-year-old Briton, who had boxed skillfully to frustrate and outpoint the aggressive but inaccurate Wilder, looked to have finally been beaten when the American champion uncorked a savage right-left combination that sent him sprawling to the floor.

Wilder celebrated as if he had won and members of his entourage moved to climb into the ring, only to stare in disbelief as Fury somehow cleared his head and got to his feet.

"I really thought I had him out of there," Wilder said afterwards.

Fury, who won the unified world title from Wladimir Klitschko in 2015 only to lose his belts as he battled depression, alcohol and drug problems, was equally baffled.

"I don't know," Fury said. "I had a holy hand upon me tonight and brought me back. I've got good fighting spirit."

While both men felt they had done enough to win the fight, both accepted the result.

"I'm not going to sit here and complain, and scream robbery or whatever," Fury said. "I thought I won the fight. I'll leave the audience to make up their mind."

Wilder, who also had Fury on the deck in the ninth round, was adamant he had won.

"I think with the two knockdowns I definitely won the fight," said Wilder afterwards. "We poured our hearts out tonight. We're both warriors, but with those two drops, I think I won the fight."

Wilder, who remains unbeaten after 41 fights, immediately called for a rematch.

"I would love for it to be my next fight," Wilder said. "Let's give the fans what they want to see. It was a great fight and let's do it again."

Fury also said he hopes to arrange a rematch.

"One hundred percent we'll do the rematch," Fury said.

"We are two great champions. Me and this man are the two best heavyweights on the planet," added Fury, who exited his press conference after leading a rousing chorus of Don McLean's classic "American Pie."

Until Wilder's sensational final round knockdown, Fury appeared to be heading for what would have been a remarkable upset.

The self-proclaimed "Gypsy King", who returned to boxing this year after missing more than two years, had boxed cleverly to evade the heavy-hitting threat of Wilder for most of the fight.

The American champion struggled to connect cleanly with Fury throughout an absorbing contest, all too often sending huge arcing haymakers whistling past Fury's head.

Fury by contrast picked his moments to attack, finding Wilder with greater accuracy and causing a nasty swelling over the American's left eye.

Wilder, the more aggressive of the two fighters early on, quickly moved into the lead after the opening rounds.

But Fury gradually grew in confidence, regularly taunting Wilder by throwing his arms up in the air or behind his back.

Wilder responded with increasingly desperate flurries of big punches, very few of which found their mark.

As several former heavyweights had predicted beforehand, the longer the fight went on, the more Fury looked in control.

However, in the ninth round, Wilder finally made his mark, dropping Fury with a short hook that had the fans on their feet.

Fury however recovered well and regained his composure to resume where he had left off.

With a large contingent of British fans in the audience of 17,698 roaring him on, a victory suddenly seemed within reach.

Wilder however suddenly found a devastating combination just when he needed it in the 12th round.

A right hand sent Fury rocking backwards towards the deck and a brutal left hand on the way down appeared to be the coup de grace for the challenger.

Fury's extraordinary Lazarus act however ensured the fight would go to the judges.