Anthony Joshua's win should move him closer to a bout against Deontay Wilder, the American who holds the World Boxing Council's version of the heavyweight title. 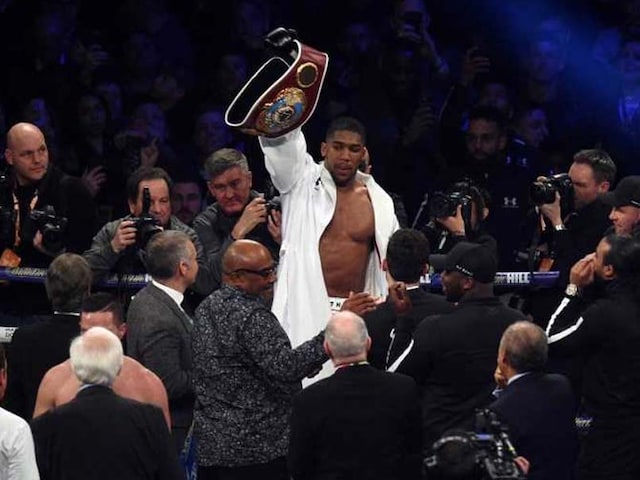 Anthony Joshua was taken the distance for the first time in his professional career before winning a unanimous points decision in his world heavyweight title unification fight with Joseph Parker in Cardiff on Saturday. After 12 rounds, Britain's Joshua triumphed 118-110, 118-110, 119-109 on the three judges' scorecards. Victory extended the London 2012 Olympic champion's perfect professional record to 21 wins from as many bouts but all of his previous successes had been by way of knockouts. It also saw International Boxing Federation and World Boxing Association champion Joshua add Parker's World Boxing Organisation belt to his collection.

Saturday's contest in front of a 78,000 capacity crowd at the Principality Stadium was the first time two previously undefeated heavyweight champions had met for a world title in Britain.

Joshua's win should move him closer to a bout against Deontay Wilder, the American who holds the World Boxing Council's version of the heavyweight title.

Wilder had been due at ringside but didn't show and a confident Joshua, speaking to Sky Sports, after his win was confirmed, said: "I want Wilder... Get him in the ring and I'll knock him spark out."

Joshua added: "That is 21 professional fights with six world title fights in it.

"My strategy was to stick behind the jab and that secured me another world title belt."

And he insisted he felt no disappointment in going 12 rounds.

"I know the bookies say I might get a knockout but forget the hype, Parker was a world champion," Joshua said.

With Joshua earning a reported 15 million pounds (USD 21 million, 17 million euros) and Parker 7 million pounds, this was easily the biggest fight of the beaten boxer's career.

The way in which referee Giuseppe Quartarone refused to let any inside close-quarter work develop proved a frustration to both boxers and Parker said: "We could have worked inside more, we can't change it.

"Of course, I'm young, fit and strong. I'm fit to go 12 rounds, thanks to all the New Zealanders here and back home," he added.

Shortly before the bout started, Parker's promoter, David Higgins, came to the press seats at ringside to allege Joshua's camp had tried to get his boxer's hand wraps changed in a bid to unsettle his man, although he added the wraps eventually remained as they were once British Boxing Board of Control general secretary Robert Smith had been consulted.

As Parker's mother looked on from ringside, Joshua took charge.

A cut around Parker's left eye was evident from the third round.

Joshua tagged Parker with a solid left in the fourth and landed again seconds before the bell ended that round.

But Parker made some good connections in the fifth and there was a furious exchange early in the sixth, before Quartarone intervened.

Joshua, having been struck late when the referee tried to break up the fight, incurred the wrath of Parker's trainer, Kevin Barry, when he too landed late in the eighth round.

Both boxers were hampered by Quartarone's interventions just when it seemed either one of them might unload with a sequence of punches.

The cut round Parker's left eye worsened and blood emerged from the wound in the tenth round.

But a game Parker kept going and the boos at the end of the contest appeared to be aimed at the referee rather than the boxers.