Inaugurating the country's first national surfing competition in Kerala's Kovalam beach, the South African cricketer was seen enjoying surfing along with the rest of the participants. 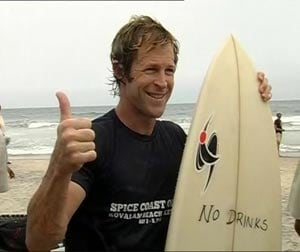 He's known for his aerial stunts on the cricket field but Jonty Rhodes feels, 'gliding on the waves with a surf board is a different ball game.'

The brand ambassador of Surfing in India, Jonty Rhodes says, "the happiest moment while surfing is when you come out of the water alive. The sea is mighty, it needs to be respected."

Inaugurating the country's first national surfing competition in Kerala's Kovalam beach, the South African cricketer was seen enjoying surfing along with the rest of the participants. With nearly 100 participants including 20 international representatives, Jonty says, "Surfing is about awareness and is a lifestyle. These people here are the pioneers for the sport in India. Being a pioneer is never easy. I would like to support their growth."

The event is organised by the Surfing Federation of India, (SFI), the governing body for surfing in India and recognised by the International Surfing Association.

The President, Kishore Kumar and Vice- President Rammohan Paranjape, both in their mid-20s and surfing enthusiasts themselves say, "their aim is to see a Team India for surfing. But we still are awaiting the recognition and support from the government," says Mr Kumar who's been a surfer since 13 years.

Harsha a regular surfer from Bangalore says he has been looking forward to this event since a long time and it's fantastic to have so many surfers at one place. Hopefully, With Jonty Rhodes now part of it, there will be more cricket fans taking to this sport. Ishina Sharma, a surfer from Mumbai says surfing is going to be big in India and many women are likely to join in the groove. The finals of the event is scheduled for Sunday.

Comments
Topics mentioned in this article
Jonty Rhodes Other Sports
Get the latest updates on ICC T20 Worldcup 2022 and CWG 2022 check out the Schedule, Live Score and Medals Tally. Like us on Facebook or follow us on Twitter for more sports updates. You can also download the NDTV Cricket app for Android or iOS.